What are the advantages and disadvantages of LCDs?

The liquid crystal display (LCD) is a flat panel display, electronic visual display, or video display that uses the light modulating properties of liquid crystals which do not emit the light directly, LCDs are used in the computer monitors, televisions, the instrument panels, the aircraft cockpit displays, and the signage.

LCDs are available to display the arbitrary images such as in a general-purpose computer display or the fixed images which can be displayed or hidden such as preset words, digits, and 7-segment displays as in a digital clock, They use the same basic technology except that the arbitrary images are made up of a large number of small pixels while other displays have larger elements.

LCDs are used in DVD players, the gaming devices, the clocks, the watches, the calculators, and the telephones, They have replaced the cathode ray tube (CRT) displays in most applications, They are available in a wider range of screen sizes than CRT and plasma displays, and they do not use phosphors, they do not suffer image burn-in,  LCDs are susceptible to image persistence. 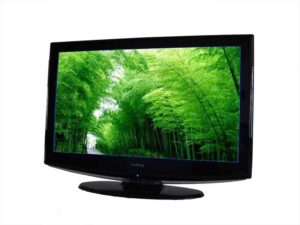 LCD’s have no radiation emission from the screen, they are better under brighter conditions because of anti-glare technology, and LCD TVs are not affected by the increase or decrease in the air pressure.

LCD’s are lighter in weight with respect to the screen size, They can be used as a computer monitor, The images appear with greater resolution, and the colors of images look more realistic, They save the electricity bills because of lower power consumption, they consume less than 1/3 the power of a comparable CRT,  they consume less electricity than a CRT and produce little heat.

LCD’s have better performance than Plasmas for smaller screen sizes, they require less power and generate less heat, They have satisfactory performance even when mounted at higher altitudes, They have a longer life span, LCDs take up about 40% less desk space, They are thin and compact.

The brightness range of LCD’s is wider, They produce very bright images due to high peak intensity, Very suitable for environments that are brightly lit, and they produce lower electric, magnetic and electromagnetic fields than CRTs.

LCDs are easy disposal, they have excellent contrast, They are immune to screen image burn-in, the screens are available in a vast range of sizes, and they are used in the battery-powered electronics, and they have low flicker rates.

LCDs are more expensive compared to Plasma TV of the same size, they have less picture quality when viewed on the side or at an angle, and there is motion delay for the fast-moving images.

The interference may require frequent readjustments throughout the day due to timing drift and jitter, Analog input requires careful modification of the pixel phase to decrease or eliminate the digital noise in the image.

The aspect ratio and resolution are fixed, LCDs are not proficient at producing black and very dark grays, In a “standard” configuration, they are not appropriate for use in dimly lit and dark conditions.

LCD have white saturation, the saturation and compression can occur due to the bright end of the intensity scale becoming overloaded, the contrast control must be adjusted.

LCDs are more fragile than CRTs, Touching an LCD screen with your fingers hard can leave pressure marks that forever mar the display, Touching a CRT with fingers will simply leave fingerprints that can be cleaned off, If you break a CRT monitor,  you can get another for free or very inexpensively, LCD’s will cost a little to a lot more to replace if broken.

LCDs can have many weak or stuck pixels which are permanently on or off, Some pixels may be improperly connected to adjoining pixels, rows, or columns, the panel may not be uniformly illuminated by the backlight resulting in uneven intensity and shading over the screen.

They have slow response times and scan rate conversion result in severe motion artifacts and image degradation for moving or rapidly changing images.

LCD is not as energy efficient as the LED, In dimly lit environments, brightness is compromised, It is not as good at LED in graduating shades of color, at lower refresh rates, the motion may be blurry for some viewers.

The advantages and disadvantages of using LED technology