The genetic traits pass from the parents to offspring by the reproduction process which is a biological process, where the living organisms produce new individuals of the same kind and thus, ensuring its continuity.

The asexual reproduction occurs by only one living organism, It mostly occurs in single-celled living organisms (such as yeast and Amoeba), It is the process by which the living organism produces new individuals with genetic traits identical to those of their parents.

Asexual reproduction occurs in unicellular living organisms, some multicellular animals and plants, It takes place by mitosis division which does not require special systems or structures in the living organism. 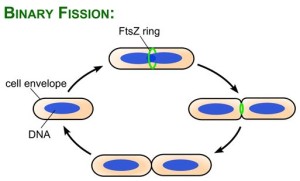 How does the reproduction by binary fission occur?

The nucleus divides by mitosis division and the cell splits into two cells, Each cell grows and becomes a new individual, Each is identical to the original cell.

How does the reproduction by budding occur in yeast fungus?

The bud emerges as a lateral bulge in the cell, The cell nucleus divides mitotically into 2 nuclei, one of them remains in the parent cell and the other migrates to the bud.

The regeneration is the animal’s ability to compensate their missing parts, The living organism can reproduce by one of its parts, It occurs in some animals (such as the starfish).

The starfish arms could be regenerated and give out a complete animal if they contain a part of the central disc of the animal.

Sporogony occurs in some fungi such as bread mould and mushrooms, some algae, where each sporangium rupture and a large number of spores are released when the spores are scattered on a suitable environment, they grow to give new organisms (fungi).

The vegetative reproduction occurs without the need for seeds but by the plants’ vegetative organs (the leaves, the roots, and the stems) in order to produce new plants identical to the parent plant.