Sexual reproduction depends on meiotic division, on forming the gametes (male-female), where the number of chromosomes is reduced to its half (n) and during fertilization, the male gamete fuses with the female gamete, therefore the original number of chromosomes returns (2n) which differs according to the species of living organisms.

Sexual reproduction provides the descendants with continuous innovations in their genetic content that enables them to continue facing the environmental changes, It needs more time and consumes more energy than the asexual reproduction, Because:

Sexual reproduction necessitates the presence of two individuals (male and female) for the production of sexual gametes, Gametes should meet for fusion during the fertilization, on mating the male gamete meets with the proper female gamete and fuses to form the zygote which divides and grows to form the embryo, then to the young and the adult. 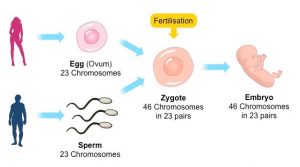 Most primitive organisms such as some protozoans, algae & fungi reproduce by two methods which are:

Spirogyra reproduces by conjugation (at unsuitable conditions) and there are two types of conjugation which are Scalariform conjugation and Lateral conjugation.

Spirogyra is known by the green scum which is more common is the standing water, where its filaments float and each filament is formed of one row of cells.

It occurs between the opposite cells of two longitudinally adjacent filaments of Spirogyra as following:

The cells of Spirogyra filament are haploid (n) and after the conjugation, the zygote is formed which is diploid (2n), so, it divides by meiosis before the germination of new algal filament, to return the haploid number of chromosomes to the cells again.

The higher plants and animals reproduce by sexual gametes (male and female) that results from the meiosis division that takes place in gonads (genital organs), The types of gametes are male gametes and female gametes.

The producing organ is produced by male gonads (testis – anther), Male gametes are produced in large numbers, where each original cell produces four male gametes because some of them are subjected to loss during the fertilization.

Male gametes are pointed body with little cytoplasm (where it loses most of its cytoplasm during its formation) and they do not store food.

The producing organ is produced by female gonads (ovary), Male gametes are produced in few numbers, where each original cell produces one female gamete (ovum) and three polar cells, Male gamete is spherical.

Male gamete often stores food, It remains stationary within the female body till fertilization (in case of the internal fertilization), Male gamete receives the genetic material from the male gamete.

The male gametes may be transported to the female gametes by two different ways that depend on the living organism species and its environment as follows:

Internal fertilization occurs in the terrestrial animals that live on land like birds and mammals, The male should introduce his sperms to the ova, that remain within the female body till fertilization.

Asexual reproduction occurs by the isolation of a body part that develops into a new individual, It does not require time and energy, All individuals can reproduce (does not require a mate), It occurs by one parent, It depends on the mitotic division and it occurs without gametes.

The features of the following generations remain the same, The offsprings are fully resemble the parent in all of its characteristics, where it receives its genetic material from one parent.

The offsprings are exposed to destruction with any change in the environment, as they are less adapted with the changeable environment conditions, The types of asexual reproduction are binary fission, budding, regeneration, sporogony, tissues culture and parthenogenesis.

It occurs by the fusion of a male gamete with a female gamete that is suitable for its species to form the zygote which divides and develops into an embryo, It needs more time and energy, The production of new individuals is limited to half the number of species members only which are the females.

It occurs by two parents that are different in the sex (male and female) or a hermaphrodite individual, It depends on the meiotic division during the formation of gametes, then the mitotic division for the development.

Gametes must be parent, Sexual reproduction provides the descendants with continuous innovations in their genetic content, The youngs gather between the characteristics of the two parents, where it receives its genetic material from both parents.

Youngs are enabled to continue facing the environmental variation, as they are more adapted with the changeable environmental conditions, The types are conjugation and reproduction by sexual gametes.