Adaptation and the nature of the food in the birds

There are a lot of birds and they spread out all over the known environments on Earth. They are adapted to their environments, modes of living, and getting of food through different ways such as the modification of their beaks and legs.

The adaptation in the birds

There are many modifications in the birds’ beaks and legs which are adapted to the food types and the way of movement.

The birds which feed on the meat (the predatory birds) have a structural adaptation such as the hawks and the vultures. They have strong and sharp crooked beaks to tear the prey’s flesh.

The predatory birds have four fingers ending with strong and sharp claws, three anterior (front) fingers, and one posterior (back) bendable to firm pouncing the prey. 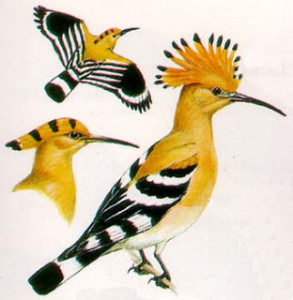 The hoopoe has a long thin beak to pick up worms and snails.

The birds that feed on the shallow water worms and snails have a structural adaptation such as the heron and the hoopoe.

Heron has a long thin beak to pick up the worms and the snails, It has long thin legs ending in thin fingers to walk in the existence of the water.

The birds which feed on mosses and fish (the water birds) have a structural adaptation such as the ducks and the geese.

The ducks have wide indented beaks in the two sides to help them filter the food from the water. They have palm legs to help in swimming.