Adaptation and continuity of life by the hibernation and the aestivation

There are many forms of adaptation of the living organisms such as hibernation, aestivation, The adaptation for hiding, the birds migration, and the adaptation in the aquatic and desert plants.

Some animals bury themselves in the mud, They stop feeding and their activities decrease to overcome the decreasing of the temperature like the frogs and the toads.

When the environmental conditions in the spring become favourable, these organisms return back to their normal activities. 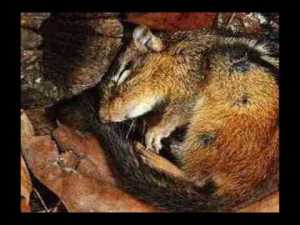 They become dormant and hide in the humid burrows avoiding the effect of the high temperature to keep the constancy of their body temperatures such as the jerboa, the desert snail, and some insects.

The animals that hibernate or aestivate store an amount of food as the fats in their bodies to provide them with the energy needed to keep their life during the period of dormancy.

The fats are characterized more than the other kinds of food by the production of large quantities of water on their reusing. So, these animals store the food, and the water together in the form of fats.

The adaptation and the nature of the food in the birds