The stages of fertilization process in the plants

The fertilization process in the plants

The flowers are the reproductive structures of angiosperms, They vary in the methods of reproduction, The process of fertilization in plants occurs when the gametes in haploid conditions meet to create a zygote which is diploid.

After the pollination process, the pollen grains sticks on the stigma which secretes sugary solution, then the pollen grain germinates forming a pollen tube that contain 2 male nuclei.

The pollen grains germinate after the carpel is pollinated, the pollen tube emerges and grows, it extends through the style till it reaches the ovule inside the ovary through the micropyle. 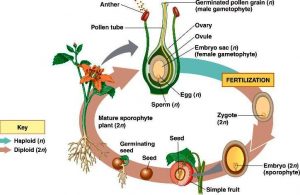 The pollen tube does not reach the ovary in a straight line, and there are two types of nuclei which are the vegetative tube and generative nuclei of the pollen grain that pass into the pollen tube.

The end of the pollen tube degenerates? In the embryo sac, the male nucleus fuses with the nucleus of the ovum ( the egg cell ) and forms a fertilized ovum which is known as a diploid zygote, This process is known as true fertilization or syngamy.

The other male gamete or nucleus enters into the embryo sac, and it fuses with the secondary nucleus which gives a triploid nucleus which is called the primary endosperm nucleus, and it becomes a food source for the growing embryo.

The process of nuclear fission, where there is the formation of the primary endosperm nucleus is called triple fission, and the zygote undergoes successive divisions to form the embryo inside the ovule.