Red List & The causes of the endanger to some endangered species

Examples of some endangered species

There are about 5000 endangered species and they are being followed up, and their status is under the investigation. 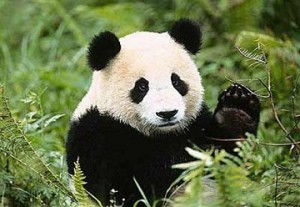 The Red List in 2008 included 450 endangered species, the most popular species are the bald eagle, the Panda bear, the ibis bird, the rhinoceros and the papyrus plant.

The panda bear inhabits Bamboo forests in the northeast China, and the cause of the endanger is due to the weak rate of the reproduction, and the rareness of the bamboo plant (its only food) which does not blossom except once every 100 years.

The Bald eagle head is covered with the white feathers which makes it look like the bald, and the cause of endanger is due to feeding on fish that contain the poisonous matter that is being dumped in the lakes and the rivers.

The cause of endanger to the Rhinoceros is due the over hunted for using its horns in some medical purposes. and its habitat is being transformed into the cultivated land.

The Ibis bird disappeared from Aswan but it is still found in Upstream Nile in Africa, and it must be imported back and reproduce its species in the protectorates which established in the Nile islands in Aswan. The cause of its endanger is due to the loss of its nests after building the High Dam.

The Papyrus plant is an aquatic plant that grew in the swamps of Upper Nile. The pharaohs used it in the  manufacture of writing papers. Now it is reproduced in the Pharaonic Village in Giza. The cause of endanger is due to the drying the swamps where they grow.