Extinct species in the recent times and causes of Extinction

The numbers of living organisms are 10 million species now. There are about 138 species which become extinct every day, So, If the rate of extinction is constant. a great number of the species would become extinct.

There are hundred millions of the organisms extincted in the old times such as the dinosaur, and the mammoth, There are some extinct species in the recent times such as the golden frog, the dodo bird, the quagga, the Australian wild cat (Tasmanian cat), and the passenger pigeon. 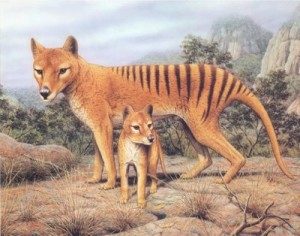 The extinction of the Tasmanian cat is due to the hunting by the peasants.

The Australian wild cat (Tasmanian cat) is a mammal which has a wolf’s head, a dog tail, a pouch-like kangaroo, and striped skin like a tiger. The last member of its species died in Sidney Zoo, Australia in 1936. Its extinction is due to the hunting by the peasants because it preys on the sheep and the chicken.

The native habitat of the passenger pigeon was North America, There were more than a billion (1000 million) birds in 1850, and the last member of its species died in one of the zoos in 1914.

The extinction of the passenger pigeon is due to cutting the oak, and the beech trees, where they were used to build its nests, and it is due to the mass hunting of the birds, and the weak rates of the reproduction, where its female lays only one egg each spring.

The Quagga is a mammal that is considered the midway between the horse and the zebra. The last member of its species was killed in South Africa in 1883. Its extinction was due to continuous hunting, The golden frog had disappeared since 1989, and had not been seen since that time.