What are the different types of rainbows?

A group of refractions and reflections of sun rays occurs when the sun is incident on the water drops or snow crystals suspended in the air leading to analyzing the light into a bow of spectrum colours known as the rainbow.

The most familiar type of rainbow is produced when the sunlight strikes the raindrops in front of a viewer at a precise angle (42 degrees), and the rainbows can also be viewed around the fog, the sea spray, or the waterfalls.

When the sunlight hits a rain droplet, some of the light is reflected, The electromagnetic spectrum is made of light with many different wavelengths which are reflected at a different angle, the spectrum is separated producing a rainbow, and the colors of the rainbow are red, orange, yellow, green, blue, indigo, and violet. 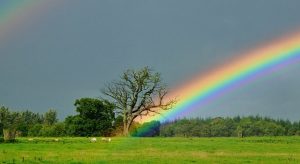 The primary rainbows that we see all of the time, they are the most commonly seen in the sky, they form 40 to 42 degrees of anti-solar point (an imaginary point opposite to the sun) These are the normal red to violet arcs that we see after it rains, if there are smaller reflective droplets, only violet color will be visible.

Secondary rainbows are caused by a double reflection of sunlight inside the raindrops, and they are centered on the sun itself, they are reflected twice inside of the raindrop, and they have the colors reversed and appear next to the primary rainbow, they appear to be higher than the primary, they are known as Alexanders Dark Band.

The Spurious or Supernumerary bows are faint color arcs that sometimes seen next to the primary or secondary bow, they need the interference of light rays of different wavelengths to be formed, and the faint pastel streaks of colour also form outside the secondary rainbow through it is rare.

The supernumerary rainbows are known as the stacker rainbows, The alternating faint rainbows are caused by interference between rays of light following slightly different paths with slightly varying lengths within the raindrops, The Interference is responsible for the lighter hues and narrower bands of supernumeraries.

The fog bows or the white rainbows are not formed by the rain but due to the fog, they are formed by much smaller cloud and fog droplets that diffract the light, They are almost white with faint reds on the outside and blues inside.

When the water droplets are too tiny for the light to pass through in the same manner as in a normal rainbow, the dispersion of light takes place, it results in white band and circles of light that is sometimes seen in the clouds, they are known as Fog bows.

Lunar Rainbows are not formed by the sunlight but due to the moonlight, they are formed when the moon emits the white light that the raindrops can refract and reflect into the atmosphere.

The Red Rainbows or Monochrome rainbow occur at the sunset or the sunrise when the light travels far distance to reach the water drops, where the shorter wavelengths like blue and green have been scattered, and only the red light (that has long wavelength) emerges from the raindrop forming the red arcs of light, So it is visible in this rainbow.

You can see Mist bows in your garden hose, Surf Bows occurs at the beach, The tertiary rainbows appear to a viewer facing the sun, They are the third-order rainbows, the third reflection of light, and their spectrum is the same as the primary rainbow.

The quaternary rainbows are the fourth-order rainbows, They also appear to the viewers facing the sun, And they are even fainter and broader than the tertiary rainbows.

The Twinned Rainbow is two distinct rainbows that produced from a single endpoint, They are the result of the light hitting an air mass with different sizes and shapes of water droplets.

The nature of light waves and analysis of white light

Visible spectrum and Properties of light