What are the causes and uses of the light refraction?

The light will not refract when the light wave passes through the boundary in a perpendicular direction, and each medium has its own optical density, so, the optical density of a medium differs from one medium to another due to change in the light velocity through such medium. 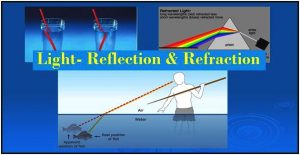 The light refraction can be used in the clinical significance in medicine especially in the optometry, the ophthalmology and the orthoptics, the refraction is also known as the refractometry which is used to determine the eye’s refractive error and the best corrective lenses to be prescribed.

There are a series of test lenses in graded optical powers or focal lengths are presented to determine which provides the sharpest and the clearest vision, and the cornea, the aqueous humor, the lens, and the vitreous humor are refractive media.

The images are formed in a camera by refraction in a manner similar to the image formation in the eye, So the accommodation to image closer objects is done differently in the eye and the camera.

Some media have an index of refraction that varies gradually with the position, So, the light rays curve through the medium rather than travelling in straight lines, So, the mirages can be seen on hot days where changing the index of refraction of the air causes the light rays to bend creating the appearance of specular reflections in the distance (as if on the surface of a pool of water).

Properties of the formed images by convex lens and concave lens