Normal anatomical position of the pelvis

It is that the anterior superior iliac spine and the pubic tubercle are at the same vertical plane, while the tip of the coccyx and the upper border of the symphysis pubis are at the same horizontal plane.

Pelvic surface: It is concave, smooth, and directed forwards & downwards. It shows 4 pairs of ventral sacral foramina, for passage of ventral rami of sacral nerves. 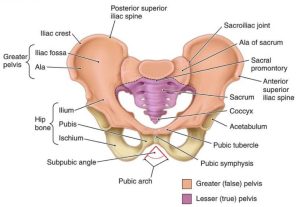 Structures attached to the pelvic surface of the sacrum

Four structures related to ala of the sacrum from medial to lateral:

Structures that get exit from the sacral hiatus

The cavity of the pelvis is divided into:

The cavity of the true pelvis has an inlet and an outlet.

From posterior to anterior:

Cavity of the true pelvis

Differences between male and female pelvis

General organization of the pelvic organs

Arrangement of the pelvic viscera in female (from posterior to anterior):

Arrangement of the pelvic organs in male