The function of the uterus in the female reproductive system 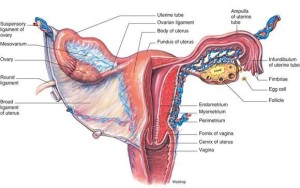 The uterus is a hollow pear-shaped organ and it has a muscular wall that can expand as the fetus grows during the pregnancy, the uterus is the largest and major organ of the female reproductive tract that is the site of fetal growth and it is hormonally responsive.

The uterus is lined with mucus membrane rich in the blood capillaries to form the placenta which responsible for the nourishment of the fetus during the pregnancy through the umbilical cord.

The uterus lies in the pelvic cavity between the urinary bladder and the rectum, the uterus in the female reproductive system protects and nourishes the fetus during the pregnancy until birth.

The uterus is a suitable organ for the growth of the embryo because it has a thick muscular wall that is rich in blood capillaries that feed the embryo and supply it with oxygen and it also protects the embryo until birth.

The uterus is the part of the pathway for the sperm to reach the ovum, It is responsible for the menstruation, the implantation of the zygote, the development of the fetus then the labor.

The uterus is responsible for the hormonal changes within the body which allows the adaptation to the different stages of women’s reproductive life, and the reproductive function of the uterus is the menses, the implantation, the gestation, the labor & delivery.

The uterus is divided into three parts, the first part is the cervix which is the lower part that opens into the vagina and the second part is the main body of the uterus which called the corpus (the body), the corpus can easily expand to hold a developing baby, and the fundus which is domed upper portion.

The vagina extends from the uterus and ends in the external genital opening, and it is a muscular tube that expands during the labour to deliver the baby.

The vagina receives the sperms during mating and it is a passageway for childbirth as it is a canal that joins the cervix (the lower part of the uterus) to outside the body.