Two ovaries and Fallopian tubes in the female reproductive system 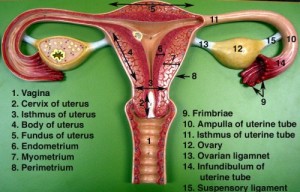 The female reproductive system consists of two ovaries, two fallopian tubes, the uterus and the vagina, It is called the female genital system, It is made up of the internal and external sex organs which function in the human reproduction.

The female reproductive system is immature at birth and it develops to maturity at puberty to be able to produce the gametes and to carry the fetus to full term.

Two ovaries are two glands having the size of a peeled almond, and they lie inside the body in the lower part of the abdominal cavity from the back.

The function of ovaries

The function of two ovaries is the production of the ova, where each ovary releases one ripe ovum every 28 days in exchange with the other ovary in a process known as the ovulation, The ovaries produce the female sex hormones which are Estrogen and Progesterone.

The signs of puberty in the female

The accumulation of fats in somebody regions, the growth and development of breasts, the growth of hair in armpit and pubic are from the signs of puberty.

The Fallopian tubes receive the ovum and direct it towards the uterus by the aid of the contractions and relaxations of the muscles in the wall of the tubes and the movement of the lining cilia.

The Fallopian tubes ligation is considered one of the means of birth control because the sperms do not reach the ripe ovum, so the fertilization process does not happen.