A reflex is defined as the involuntary response of an organ to a stimulus. There are several ways of classifications:

According to the center:

According to the location of receptors:

According to the number of synapses: 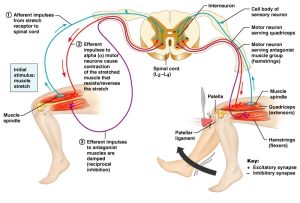 They result from the stimulation of receptors in the skin.

They result from the stimulation of receptors present in muscles and tendons. They include the stretch reflex. This is a monosynaptic reflex elicited by applying stretch to a muscle. The result is a reflex contraction of the stretched muscle. It is the basis of both muscle tone and tendon jerks.

The extent of the response in a reflex is directly proportional to the intensity of the stimulus. The more intense the stimulus, the greater is the spread of excitatory impulses up and down the spinal cord to involve more and more motor neurons, e.g. a weak painful stimulus applied to the sole leads to dorsiflexion of the ankle while a stronger stimulus results in flexion of the knee and hip.

In a reflex action, impulses pass only from afferent to efferent neurons and never in the opposite direction.

The two types of summation, spatial and temporal, occur in reflex action. Excitation field is the neuronal pool that receives the terminal knobs of a certain afferent nerve. The central part of this field is called the discharge zone because the neurons in this zone receive a large number of synaptic knobs and their excitability is increased to the threshold of discharging.

On the other hand, the peripheral parts of the excitation field are known as the subliminal (or subminimal) fringe, because the neurons in this zone receive a few numbers of synaptic knobs and they are only facilitated (but they do not discharge).

This is the time that elapses between the application of the stimulus to the receptor and the appearance of the response. It includes the following:

In a reflex action, when a certain group of muscles contracts, the antagonistic group relaxes to the same degree. This occurs via the presence of interneurons that release an inhibitory transmitter at its junction with the AHC supplying the antagonistic muscle.

9. Recruitment and after discharge

In a reflex action, the muscle tension rises gradually due to the gradual activation of the motor neurons. The motor neurons are said to be recruited one after the other. This recruitment of motor neurons is due to different conduction velocities in the afferent fibers and the presence of various interneurons with variable number of synapses.

While after discharge denotes that, when stimulation is stopped, the muscle relaxes gradually because the motor neurons are still activated by impulses arriving through the reverberating circuits and also caused by the same causes of recruitment.