Golgi apparatus is found in all cells and is well-developed in the glandular secretory cells.

It is not stained with H & E in routine histological sections. However, in H & E-stained sections of the cells synthesizing and secreting protein, the Golgi apparatus is well-developed and its site could be seen as a negative Golgi image, a clear pale area near the nucleus against the basophilic cytoplasm e.g. in plasma cells. It can be seen in histological sections with silver stain.

It consists of a collection of flattened, curved, membrane-bounded saccules or cisternae called the Golgi stacks. Each stack consists of 4-6 cisternae. The cisternae are narrow throughout most of their length but slightly expanded at the ends. The Golgi stack is cup-shaped with a convex surface (cis face) and a concave surface (trans face):

The function of the Golgi apparatus

Post-translational modifications of proteins previously-synthesized in rER through removal, addition or modification of sugars. Packaging of different proteins in the membrane-bounded vesicles. Sorting and targeting of vesicles to the right destination: 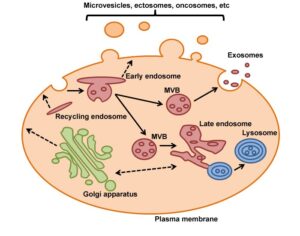 Endosomes are a system of vesicles and tubules involved in the endocytotic pathway. They are divided into two compartments:

They are membrane-bounded organelle containing about 40 types of acid hydrolytic digestive enzymes, including proteases, nucleases, phosphatases, and lipases. They are responsible for the intracellular digestion of different materials. Lysosomes are thought to be produced by a gradual maturation process as they are assembled by fusion of the clathrin-coated vesicles coming from the Golgi complex with late endosomes.

Lysosome has a surrounding membrane with unique phospholipids that prevents the leak out of the enzymes to the cytoplasm and also protects the membrane from hydrolysis by its own enzymes. If a lysosome leaks its contents, the released enzymes would be inactive because of the neutral pH of the cytoplasm.

They can be recognized by several histochemical methods used to demonstrate the lysosomal enzymes.

Lysosomes vary in their number in different cell types, they are abundant in phagocytic cells. Lysosomes are heterogeneous in shape and the appearance of their interior. Some are electron-dense, others show electron-lucent areas.

Pathways for intracellular digestion by lysosomes

Different pathways deliver material for digestion within the lysosomes, depending on the nature of the digested material.