Pelvic peritoneum covers most of the intra-abdominal (or coelomic) organs, It is composed of a layer of mesothelium supported by a thin layer of connective tissue, It is the serous membrane forming the lining of the abdominal cavity or coelom in amniotes and some invertebrates, such as annelids, It is the inferior reflection of the peritoneum over the fundus of the urinary bladder and the front of the rectum at the junction of its middle and lower thirds.

Applied anatomy: Collection in Douglas poutch could be drained by puncture of the posterior fornex of the vagina. 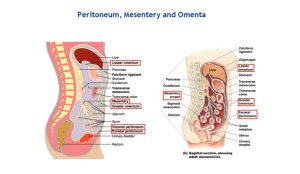 Muscles of the pelvic wall:

The Obturator fascia covers the pelvic surface of the obturator internus, It is thickened in its upper part forming what is called a tendinous arch= white line, The tendinous arch gives attachment to the levator ani muscle.

Muscles of the pelvic floor

It is an abroad muscle that arises from the side of the lesser pelvis and unites with its fellow of the opposite side to form the greater part of the pelvic floor.

Origin: it arises from a line extending from the pelvic surface of the body of the pubis, a white line of obturator fascia (tendinous arch), and the inner surface of the ischial spine.

Insertion: as the fibers pass backwards, it can be differentiated into 3 parts:

They all form sling-like action around tubular structures.

Clinical note: during labour, the perineal body may be torn leading to prolapse of the uterus because the gap between the anterior border of the 2 levator ani becomes wider.

Branches of the anterior division

Branches of the posterior division

Embryologically, this artery represents the continuation of the aorta.

It is the main vein draining the pelvis. It is formed by the union of most of the veins which accompany the branches of the internal iliac artery just above the greater sciatic foramen. It receives the following tributaries:

The visceral tributaries of the internal iliac vein arise from the venous plexuses around or in the walls of the viscera. These are:

It closely accompanies the artery and ends in the left common iliac vein.

It ascends close to the left side of the artery and continues up as the inferior mesenteric vein.

Site: on the posterior pelvic wall, in front of the piriformis and behind the parietal pelvic fascia, sigmoid colon, and rectum.

(A) From the roots of the plexus

(B) From the plexus itself