The heart keeps the blood moving throughout the body. Blood carries nutrients and oxygen throughout the body, it collects waste products and returns them to the liver and kidney for further processing and excretion, The heart is composed of cardiac muscle, specialised conductive tissue, valves, blood vessels & connective tissue. It is comprised of specialized conductive tissue that can generate an action potential independent of the nervous system.

Histology of the heart

The wall of the heart is composed of three layers: these are:

Cardiac because it is present in the wall of the heart. Striated because it shows transverse striations. Involuntary because its contraction is initiated by the spontaneous depolarization of special pacemaker cells. 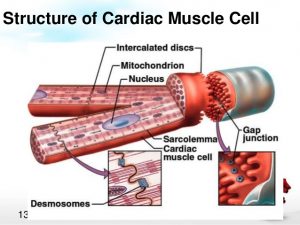 The myocardium of the heart consists of cardiac muscle fibers connected together by connective tissue.

1. Myofibrils: The myofibrils branch and anastomose thus they are not perfectly in register with one another and hence cardiac muscle fibers appear faintly striated. The pattern of cross striations and the designation of the A, I, M, H-bands, and Z-lines are identical to that of skeletal muscle. The myofibrils diverge around the nucleus, leaving the sarcoplasm at the nuclear poles containing various organelles e.g. numerous mitochondria, and inclusions e.g. glycogen granules and lipofuscin pigments.

2. T tubules: They represent inward extensions of the extracellular space at the sarcolemma. They are large & numerous surrounding the myofibrils at the Z line. In addition to their role in excitation-contraction coupling, these tubules provide additional surface area for the exchange of metabolites between cardiac muscle fibers and the extracellular space.

3. Sarcoplasmic reticulum: it is less organized than the skeletal muscle with absent terminal cisternae. It consists of narrow anastomosing sarcotubules, in close apposition with the T tubules forming diads.

4. Intercalated discs: These are the specialized junctions of cell membranes of adjacent cardiomyocytes. They extend across the fiber at the level of the Z lines in a stepwise manner. Two regions can be distinguished in the intercalated discs:

There are three main types of cardiomyocytes:

Site: they are located in the sinoatrial node, the atrio-ventricular node, and the trunk of the bundle of His.

Site: they are located in the myocardium of the ventricles.

Histological structure: They differ from contractile cardiomyocytes in:

The cardiac muscle fibers have no capacity for mitosis (statice cell population). Heart muscle responds to increased functional demands by compensatory hypertrophy. There is no possibility of regeneration in cardiac fibers and injured cardiac fibers are replaced by fibrous scar tissue.