Sensitivity in plants (Tropism types, response to touch and darkness)

Sensitivity in plants includes Tropism , response to touch and darkness .

Response to touch and darkness in Mimosa plant

Response of Mimosa leaflets to touch : If you touch a Mimosa leaflet , its petiole soon droops as if it has wilted , other neighbouring leaflets soon will follow till the effect is seen in all the leaflets .

Explanation of the response of Mimosa to the touch and darkness

The swollen structures ( pulvinus ) act as joints in these movements , as the following :

The cell walls of lower half of the pulvinus are more sensitive than those of the upper half and they play the main role in this movement .

When the plant is touched or at darkness , the lower surface of pulvinus shrinks , This leads to water diffusing to the neighbouring tissues , and hence the leaflets droop , but when the stimulus is removed , the cells regain their turgidity and the leaflets open once more . 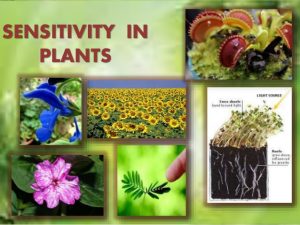 Tropism and subsequent movement represent the most common type of sensation in plants , Tropism is the curvature of stem or root of plant , when its sides are subjected to factors ( stimuli ) as light , humidity and gravity in unequal form .

Types of tropism are determined according to the affecting factor , as the following :

Experiment : to prove the occurrence of phototropism

Observation : The stem inclines towards the source of light , The root grows away from it .

Boysen Jensen explained this phenomenon during his observations and results of experiments on the oat ( Avena ) coleoptile .

Explanation : Curvature towards the light ( phototropism ) is the result of unequal concentration of auxins on the two sides of coleoptile which causes the unequal growth of two sides .

Auxins are chemical compounds secreted from the coleoptile’s tip of plants and affected by the external factors , The main type of auxin is indole-acetic acid ( I A A ) .

Went made his experiment to prove the results of Boysen Jensen , as the following :

Stem is positive phototropic , as the auxins in the stem move away from the side facing the light to the non-illuminated side , this leads to the elongation of cells on that side , thus curvature towards the light occurs .

Root is negative phototropic , as the accumulation of auxins on the dark side produces an opposite effect , Elongation is inhibited in the dark side , while the illuminated side continues to grow , so , the root bends away from the light .

Explanation of the difference in auxins’ effect on both root and stem :

Scientists named this phenomenon the geotropism , Geotropism is the response of plant parts to the external stimulus which is the gravity , where they move away from or toward it .

Explanation : Curvature is due to the variation in growth of the two sides of organ as a result the unequal distribution of auxins

When the plant grows in its natural vertical position : Auxins will be equally distributed in the tips of both root and stem , As a result , the stem grows vertically upwards , while the root grows downwards .

When the plant grows in a horizontal position : Auxins accumulate in the lower side of both the root and stem .

In stem : auxins activate the cells of lower side of the stem which elongate more than those of the upper side , and so the tip of stem curves upwards against the gravity ( negative geotropic ) .

In root : accumulation of auxins in the lower side of root inhibits the activity , and so cells of the upper side elongated more than the lower side and the root bends downwards ( positive geotropic )

It is the response of plant parts to the external stimulus which is the humidity , where they move away from or towards it .

Experiment : To prove the hydrotropism phenomenon

The root is positive hydrotropic , as Auxins accumulate in the side facing water and inhibit its elongation , while the cells of far side continue their normal growth , which leads to the curvature of root towards water .

The types of tropism and their effects on the root and stem :