The nucleus is the largest membranous organelle of the cell. It contains the chromosomes together with the machinery for DNA replication and RNA transcription and processing. The nucleus directs the process of protein synthesis in the cytoplasm by informational macromolecules (RNAs) formed in the nucleus and transported to the cytoplasm.

Usually, each cell has a single nucleus. Sometimes, liver cells are binucleated. Skeletal muscle fibers (cells) are multinucleated, whereas mature RBCs have no nuclei.

Components of the interphase nucleus

It consists of two parallel membranes, outer and inner separated by the perinuclear cisterna. It is perforated by the nuclear pores that provide a channel through which the nucleus and cytoplasm communicate and exchange substances. 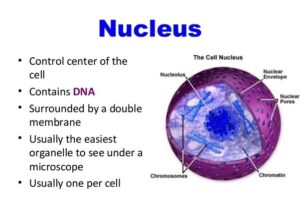 It is continuous with the rough endoplasmic reticulum. It is covered with ribosomes adhering to its outer surface. These ribosomes synthesize the transmembrane proteins of the nuclear membranes.

It is supported at its inner surface by the lamins forming the nuclear lamins.

The function of the nuclear lamina

They are perforations in the nuclear envelope where the outer and inner nuclear membrane fuse. These pores are not uniformly distributed and vary in number from few to several thousands in metabolically-active cells. The nuclear pores provide a bidirectional channel through which the nucleus and cytoplasm communicate and exchange substances e.g. ribosomal subunits.

Chromatin is formed of deoxyribonucleic acid (DNA) conjugated with histone proteins. Because of its contents of nucleic acids, the nuclear chromatin strongly binds basic dyes such as hematoxylin. DNA is extensively-packaged in chromatin as:

According to its appearance in the interphase nucleus, two forms of chromatin are known :

Heterochromatin (condensed chromatin), which represents the inactive part of chromatin. It may be able to transform into euchromatin when needed.

It appears as dense basophilic clumps.

It appears as condensed filaments or granules distributed in the following sites:

Euchromatin (extended chromatin), which represents the active part of chromatin, i.e. this chromatin is stretched out so that the genetic information in the DNA can be transcribed.

It appears as lightly-stained basophilic areas.

It appears as dispersed filaments or granules.

The proportion between euchromatin and heterochromatin differs from one cell to another according to its functional activity. Active cells e.g. dividing cells and those with high synthetic activity have a lightly-stained euchromatic nucleus with a prominent nucleolus. During cell division, chromatin is condensed and organized into the chromosomes.

A typical metaphase chromosome is formed from two chromatids held together at the centromere. Each chromatid is formed of a single DNA molecule that contains many genes.

It is a spherical body within the nucleus with no surrounding membrane. Metabolically-active cells have highly-basophilic large or multiple nucleoli. It is the site of formation (transcription) of ribosomal RNA. These rRNAs are packaged with their associated proteins to form the ribosomal subunits that are exported to the cytoplasm via the nuclear pores to start the process of protein synthesis.

It is a colloidal protein solution that provides a medium for the rapid diffusion of metabolites and for the movement of different kinds of RNAs towards the nuclear pores.