Your skin protects your body from many viruses and bacteria you are exposed to daily. The skin protects you from the sun’s rays – specifically ultraviolet light – that can damage cells. healthy skin helps your body keep its temperature at a constant level. Healthy skin helps you react better to important changes around you by feeling pain or pressure.

The integumentary system consists of the skin (integument), the skin appendages which include hair, nail, sweat, sebaceous & mammary glands.

The skin covers and protects the entire body, without skin, people’s muscles, bones, and organs would have no support. The skin contains lots of tissues each doing a different job, It protects your body from the dangers of the harsh environment, it keeps your body at the right temperature, and allows you to have a sense of touch.

Skin regulates the body temperature through the sweat glands, When the body becomes overheated, sweat glands give off moisture (perspiration), which cools the body as it evaporates, the body part responsible for the sense of touch, so, the skin works with the nervous system to alert the body to potential dangers by detecting pressure, pain, heat, and cold. 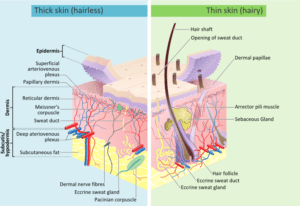 The skin is considered to be one of the largest organs in the body, accounting for about 16% of the body weight, it is composed of two layers of different embryonic origin and structure; however, they are firmly adherent to each other:

lt is a keratinized stratified squamous epithelium that is composed of four types of cells; keratinocytes, melanocytes, Langerhans’ cells, and Merkel’s cells.

Microscopically, keratinocytes are arranged, starting from deeper to superficial epidermis into 5 distinct layers:

The color of the skin depends on the interaction of three factors:

The racial differences in color: number of melanocytes is approximately the same in all races, however, hereditary and racial factors control the amount and the size of melanosomes produced and transferred by these cells.
Lack of pigmentation occurs in albinism, in which, melanocytes fail to form melanin, Vitiligo, a depigmentation disorder occurs due to the degeneration and disappearance of entire melanocytes.

Effect of ultraviolet rays: Melanin functions as a protective screen against the harmful ultraviolet light, thus exposure to sunlight accelerates the rate of melanin production.

Langerhans’ cells are members of the mononuclear phagocytic system derived from the bone marrow.

Histological features: They are branching cells with multiple cytoplasmic processes present between the cells of stratum spinosum. By LM, they appear with a highly folded irregular nucleus and pale clear cytoplasm. By EM, they have abundant lysosomes in their cytoplasm but no keratin filament and no desmosomes between the Langerhans cells and adjacent keratinocytes.

Histological features: They are large cells with short processes, present in the basal layer of the epidermis, with their long axis parallel to the basement membrane, they are attached to the surrounding keratinocytes by numerous desmosomes.

Function: They are epidermal receptors for fine touch sensation. The sensory nerve fibers traverse the basement membrane of the epidermis to end as expanded tactile discs near the Merkel’s cells.

The dermis is a flexible connective tissue generally thicker than the epidermis, it contains:

The hypodermis is a subcutaneous layer that lies beneath the dermis, however, it is not considered as part of the skin, it is a layer of loose connective tissue rich in fat cells.

The function of the hypodermis:

The skin is classified into thick and thin skin:
a. Thick skin: