The calculation of the change in heat content accompanying the burning of different materials , helps the firemen in identifying and choosing the most suitable method to put off the fire .

The change in the heat content differs according to the type of change ( physical or chemical ) . 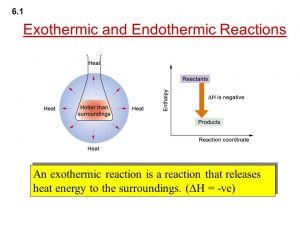 On dissolving a solid substance in a liquid , this process is accompanied by an increase or a decrease in the temperature of the resulted solution .

By dissolving Ammonium nitrate ( NH4NO3 ) in water , the temperature of the solution decreases due to absorbing an amount of energy .

The solution is called Endothermic solution .

On dissolving Sodium hydroxide ( NaOH ) in water , the temperature of the solution increases , due to releasing an amount of energy .

The solution is called Exothermic solution .

The quantity of heat absorbed or released on dissolving one mole of the solute in a certain amount of the solvent to obtain a saturated solution under standard conditions .

The heat of solution can be calculated by the following relation :

Where , In diluted solutions , the solution mass ( m ) can be expressed by the volume , because the density of water in normal conditions equals 1 g / cm3 .

If the volume of the produced solution is ( 1 L ) and the amount of solute is ( 1 mol ) , the heat change in this case is called Molar heat of solution .

The heat change resulting from dissolving one mole from the solute to form one litre of the solution , If the amount of solute is greater than 1 mole , we can calculate the molar heat of solution as the following :

Explanation of the source of the heat of solution

Separating solvent’s molecules from each other

Endothermic process , where an amount of energy ( Δ H1 ) is absorbed to overcome the attraction force between the molecules of the solvent with each other .

Separating solute’s particles from each other

Endothermic process , where an amount of energy ( Δ H2 ) is absorbed to overcome the attraction force between the particles of the solute with each other .

Exothermic process , where , an amount of energy ( Δ H3 ) is released when solvent molecules are combined with the particles of solute .

The value of heat of solution Δ H° sol equals to the sum of these three energies :

Hydration energy is the attaching of the dissociated ions with water molecules .

The type of dissolving process ( exothermic or endothermic ) is determined by the value of Δ H° sol .

When 1 mol of sodium hydroxide NaOH ( s ) dissolved in two different amounts of water H2O ( l ) , the heat of solution differs as the amount of water differs , as the following equations :

Standard heat of dilution Δ H° dil is the quantity of released or absorbed heat for each one mole of solute when diluting the solution from a high concentration to another lower concentration with the condition of being in its standard state .

Because during dilution , the number of molecules of water increases and separate the ions or molecules of the solute from each in the concentrated solution , which needs an amount of energy .