Heat content of a substance ( Molar enthalpy ) and Thermochemical Equation

The stored chemical energy in the molecule is represented in the energy that is found in the chemical bonds between atoms ( ions ) with each other whether these bonds are ionic bonds or covalent bonds .

The stored chemical energy between molecule is represented in the intermolecular forces like Van der Waals forces ( It is considered as a potential energy ) and Hydrogen bonds ( These bonds depend on the nature of molecules and their polarity .

The sum of these energies in one mole of a substance is called the Molar Enthalpy ( H ) or The Heat Content of the Substance . 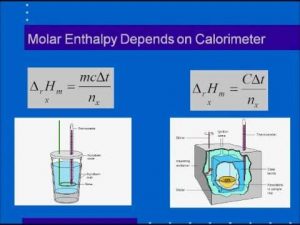 These standard conditions are :

A symbolic chemical equation that includes the heat change accompanying the chemical reaction and this heat change is represented in the equation as one of the reactants or products .