Elements are arranged in ascending order of their atomic number and according to their electronic configurations, the sequence of elements agrees with the Auf-bau principle, The long form periodic table is classified into 4 blocks which are: S-block elements, P-block elements, d-block elements, and f-block elements.

The elements are arranged in an ascending order of their atomic numbers forming a table of 18 vertical columns and 7 horizontal periods, To indicate the type of the element: S, P except zero-group is a representative element or main group element, zero group is a noble gas, d is the main transition element, and f is the inner transition element.

All elements in group VII-A are called halogens, The electronic configuration of their outer sublevel is nP5, they are diatomic-monovalent, Seven non-metallic elements are diatomic molecules at room temperature (H2, N2, O2, F2, Cl2, Br2, and I2). 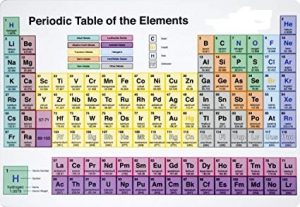 Elements in zero-group are called noble gases: (2He, 10Ne, 18Ar, 36Kr, 54Xe, 86Rn), they are monoatomic and the electronic configuration of the outer sublevel in the noble gas is nP6 except 2He (1S²), The maximum number of electrons which sublevels can take is S2, P6, d10, F14, The sequence of energy levels are:

Electrons occupy the sublevel of lower energy first and then the higher energy, All elements in the same group are similar in properties, nP6 is the zero group, d6, d7and d8 are called group VIII, d9 is called group I-B, d10 is called group II-B, The long form periodic table is classified into four blocks:

S-block elements (nS1→2) are placed in the left-hand block of the table, the outer most electrons occupy the S-sublevel, It consists of two groups of elements, I-A and II-A, since the S-sublevel consists of one orbital filled with 2 electrons, The electronic configuration of group I-A is nS¹ and group II-A is nS², where n is the number of outer energy level and the number of period at the same time.

P-block Elements (nS2, nP1→6) are placed in right-hand block of the table, the outermost electrons occupy the p-sublevel, They are six groups (III-A, IV-A, V-A, VI-A, VII-A, and group number zero of noble gases, Since the P-sublevel consists of 3 orbitals which are filled with 6 electrons.

d-block Elements [nS2, (n−1)d1→10]: (Main Transition elements) are elements in which the sublevel d is successively filled with increasing atomic number, They lie in 10 vertical columns since the d-sublevel consists of 5-orbitals filled with 10 electrons, Ten vertical columns are represented  by 8 groups (seven of which belong to group B) and the other three belong to group VIII, They are divided into 4 series which are:

Group VIII is not classified as group B due to the absence of elements similar in properties in the main group, Elements of group II-B are called post-transition elements.

f-block elements (Inner transition elements) are the elements in which the sublevel f is successively filled with increasing atomic number and classified into two series Lanthanides and actinides.

Ionization Energy is the amount of energy required to remove the most loosely bound electron completely from the isolated gaseous atom (Endothermic), it is possible to remove one, two, three or more electrons from the atom, so, there is First, second, and third ionization potential.

First ionization potential is the energy required to convert an atom to an ion with one positive charge.

The oxidationn number is the positive or negative charge of the ion or the atom in the compound as the ionic or covalent compound.