The oxidation numbers increase in the first transition series from Sc to a maximum in Mn then decrease again to Zn with an exception for the elements of group I–B because from Sc to Mn, the number of unpaired electrons increases and from Mn to Zn pairing of electrons takes place.

The elements of the first transition series are located in the fourth period after calcium 20Ca whose its electronic configuration is [18Ar] 4S2, after that there is a gradual filling of the five orbitals of (3d) sublevel by single electron in each orbital in sequence till manganese (3d5), After manganese pairing of electrons takes place in each orbital till zinc (3d10) (Hund’s rule).

Chromium and copper are abnormal from the expected electronic configuration as their configurations are 24Cr (Ar) 3d5 4S1, and copper 29Cu (Ar) 3d10 4S1, in these elements, we find that their outer most sublevel 4s and 3d in chromium are half filled while in copper 4s is half filled but 3d is filled, this explains that the atom has energy, this means that it has extra stability when the outer most sublevel is half filled (d5) or filled (d10) but this is not the only main factor that causes the stability of the atom. 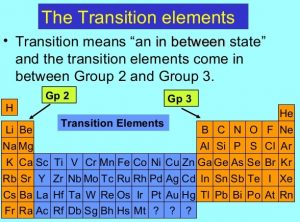 The atom or the ion becomes stable when the sublevel d is:

All elements of the first transition series have oxidation state (+2) because after losing the electrons of (4s) sublevel at first (except for scadium), while in the higher oxidation states they lose the electron of (3d) in sequence.

Representative metals like sodium, magnesium & aluminum have one oxidation state due to the increasing in the second ionization potential of sodium and the third of magnesium and the fourth of aluminum is very high because we need high energy to break down a complete energy level, so, it is difficult to obtain Na+2 or Mg+3 or Al+4 during the chemical reaction under normal condition.

Scandium doesn’t produce scandium ion Sc+4 by normal chemical methods, scandium has only one oxidation state (Sc+3) because the difference between the third I.P and fourth I.P is very large due to breaking of a complete energy level.

Scandium gives (+3) oxidation state not (+2), because the difference between the 2nd and 3rd ionization potential is small, so scandium loses two electrons from 4S sublevel then one electron from 3d sublevel to be more stable, i.e. the stability of Argon.

Scandium doesn’t form compounds in which scandium has oxidation state (+2) because when giving scandium energy, it loses (3) electrons, this is because energy of sublevel (4S) is near from energy of sublevel (3d), so, atom becomes more stable and electronic configuration of scandium reach to the nearest inert gas.

The elements of first transition series are characterized by a variety of its oxidation states as the two sublevels (4S) and (3d) have nearly equal energy and their electrons are lost in sequence when the atom is oxidized.