The properties of the noble (inert) gases 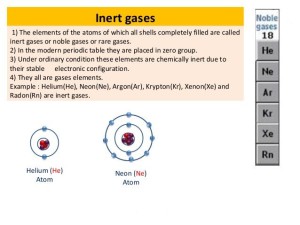 The inert gases are the elements in which the outermost electron shells are completely filled with the electrons, so they don’t participate in any chemical combination in the ordinary conditions.

The noble gases are odorless, colorless, monoatomic gases with very low chemical reactivity, and each molecule consists of one single atom (monoatomic).

The noble gases have weak interatomic force, they have low melting and boiling points, they are all monoatomic gases under the standard conditions, The noble gases are located in the far-right column of the periodic table, they are in group (0) or group (18).

They have a valence of zero, their atoms cannot combine with other elements to form compounds, The noble gases have full valence electron shells, they are stable and do not tend to form chemical bonds.

The noble gases are commonly used in lighting because of their lack of chemical reactivity, and they glow in distinctive colours when they used inside gas-discharge lamps such as neon lights.