What is the difference between Chromium and Google Chrome ?

While Chrome is based on Chromium , Google adds a number of proprietary features to Chrome that Chromium lacks like automatic updates & support for additional video formats , Google Chrome includes licensed codecs for these proprietary media formats , giving you access to a wider variety of media content-particularly sites using HTML5 video to stream H.264 videos .

You have to note that while Chromium is not Google-branded , It is still very Google-centric , It contains the same sync features found in Chrome , allowing you to log in with a Google account and sync your data , Chrome has a series of features that aim to push the usage of Google services , those are absent in Chromium . 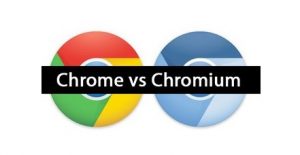 On Windows and Mac , using Chromium is a little tougher , You can get official Chromium builds , but they are bleeding-edge-only & won’t automatically update , The updater is a closed-source part of Google Chrome , You could get third-party builds from someone , You’d have to trust the third-party distributor , You could compile Chromium from the source code yourself .

Google Chrome includes crash reporting features that are not found in Chromium , Linux distributions may modify Chromium’s code before giving it to you , If you’re trying to pin down some Chrome bug , you’re probably better off using Chrome instead of Chromium .

Although , Chromium includes many features that depend on Google’s servers & those features are enabled by default , You’ll see these features listed on Chromium Settings page , They include a web service that helps fix mistyped web addresses , a prediction service , Google’s anti-phishing feature & more .

Chromium browser is more readily available for more Linux distributions , Chrome is not , Chromium is not packaged with the necessary closed source video codecs to play Netflix content , There is no closed source plugins means no Adobe Flash included or the built-in PDF reader .

Chrome is updated by Google directly , Since it doesn’t need to be redistributable and open source , Chrome includes things that we can’t ship in Ubuntu out of the box , like Flash and H264 support , However you can install this support with a few packages .

Google Chrome presents Adobe Flash Player pre-installed ( not open source software ) and Chromium not , But you can install it later very easily , That Chrome has auto-update mechanism & it has Google’s brand , Chrome is not FOSS , Chromium is , Google Chrome is simply a re-branding of Chromium , but is a little more ready for public consumption .

Google Chrome is the end product designed for everyday use , Chromium browser is an open source project to develop the code that runs Google Chrome , Google Chrome releases obtained via Google officially should be stable whereas code from the Chromium project is cutting edge .

If you want a browsing experience that isn’t riddled with bugs , You have to use Google Chrome , If you enjoy browser crashes , memory and CPU usage being through the roof , You have to use Chromium , you clearly need the bleeding edge untested code direct from the chromium project .

Although , many Linux users who aren’t so passionate about open-source software might want to install Chrome rather than Chromium , Installing Chrome gets you a better Flash player if you’re using Flash & unlocks a larger amount of media content online , Google Chrome on Linux can now stream Netflix videos ,This requires H.264 support for HTML5 video , but Chromium doesn’t include .

Google Chrome comes with Abode Flash ( PPAPI ) that will be automatically updated together with Chrome , Chrome is kept up-to-date on Mac and Windows due to the special program , Chromium security sandbox may be disabled by some Linux distributions , Installing Chromium on Windows and Mac is not as straightforward as Chrome .

In Chromium , the feature of crash reporting is not available , In Chrome , The crash reports are sent to Google , the Chromium code may be modified by Linux distributions , Google Chrome isn’t available from the Software Center , You need to visit Chrome Browser and follow a fairly simple procedure to have Google Chrome installed .

if you are looking for open-source software & you don’t want to use closed-source , Chromium browser is more suitable , but If you are not so interested in open-source software , then it is better to install Chrome , It offers better Flash player if you need access to wider media content .

Google Chrome offers a built-in Pepper Flash (in collaboration with Adobe) as well as a built-in PDF Reader that’s as functional as Ubuntu’s default PDF Viewer , updating Chromium was a community effort and not directly supported by Canonical , This resulted in outdated versions of Chromium being available in the Software Center .