Bitcoin Cash is a peer-to-peer electronic cash system with an increased block size of 32MB and a block time of 10 minutes, Unlike Bitcoin, BCH adjusts its difficulty every 600seconds or every block instead of once every 2016 blocks, The supply limit is 21 million BCH and currently, a decision has not been made regarding any subunits, Bitcoin Cash stands out mostly with its implementation of smart contracts.

What is Bitcoin Cash (BCH)?

Bitcoin Cash is a cryptocurrency with its own blockchain, It works like a digital currency and new BCH (Bitcoin Cash) is created through Bitcoin Cash mining, It is a hard fork of the Bitcoin network, Tired of the scalability issues & SegWit implementation, It is a part of the BTC’s community decided to fork out in another direction creating another chain in the blocks & a new altcoin.

Bitcoin Cash (BCH) is an online currency formed out of a dispute between Bitcoin (BTC) developers, It is sometimes referred to as Bcash, It is for everyone, BCH was formed out of a hard fork on the original Bitcoin blockchain, It is active since August 1, 2017, Larger block sizes mean BCH can process more transactions per minute than BTC. 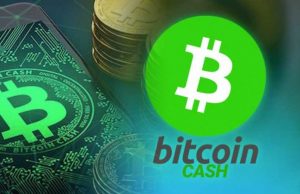 Bitcoin Cash is an offshoot of Bitcoin, Bitcoin Cash performs a similar function and has the same overall goals as its predecessor, BCH is designed to be a digital decentralized currency that’s not constrained by governments or geographical borders,  Bitcoin Cash (BCH) is expected to thrive more in the long run which means that people will get more returns in the future.

You will exchange funds from virtually anybody in the world, You do not need to transfer the money through a bank account or another merchant, So, you do not have to spend any amount on fees, You can transfer BCH without having to offer personal information that can make it safer compared to other payment methods, so, you do not have to worry about your identity getting stolen.

You will send & receive the amount of money that you get immediately, There is no waiting time anymore unlike when you choose other merchants, The Bitcoin Cash block (in the blockchain) is eight times bigger than a Bitcoin block, This makes BCH faster, cheaper & more scalable than Bitcoin, meaning that more people can transact on the blockchain at any given time, Bitcoin cash is becoming more & more adopted by the day because of this.

There are many reasons to invest in Bitcoin Cash & most of them arise from its multiple merits, Unlike Bitcoin, that limits the maximum block size to 1MB, Bitcoin Cash initially increased the block size to 8MB, But since May 15, 2018, the block size has increased more, so, The current block size is 32MB, having a larger block makes sure transactions get validated & processed much more quickly, The overall scalability of the network increases and the fees of the transactions fall, creating an absolutely win-win situation.

Bitcoin Cash has customizable & cheap transactions, It has Emergency Difficulty Adjustment (EDA), It has secure & immutable blockchain, The Bitcoin Cash hash wars are raging in the crypto world, it has been divided into several camps within the BCH community, if the coin does split, the users will not be inconvenienced as this Bitcoin fork was designed to have a great safety mechanism against replays or wipeouts.

Bitcoin Cash is listed on almost all of the top cryptocurrency exchanges and this ensures a high degree of ease and convenience in buying & selling this crypto coin, This drives adoption and increases the investment-potential of this fork of the pioneering cryptocurrency Bitcoin, Bitcoin Cash is based on well-established technology, It can be used by consumers and it is more efficient than Bitcoin.

Bitcoin Cash is still in the stage of capturing & realizing its own place in the crypto market, many people speculate that Bitcoin Cash might take a good portion of Bitcoin’s market share, making it the new dominant crypto in the industry, Bitcoin Cash has addressed the scaling issues that Bitcoin faces, so, it allows more people to use it with ease & lower fees.

Bitcoin Cash comes with the automatic adjustment of the network`s computing complexity, it has a direct dependence on the speed of extraction of new data, if for a certain amount of time miners get an insufficient number of blocks, then complexity decreases, This pattern works in both directions.

Miners started to use this vulnerability and got BCH in periods of complexity recession, and when the situation changed, they turned to BTC, Such actions led to the network`s destabilization and increased volatility of the BCH rate, This problem has not been solved till this day, but the development team manages to restrain it.

Because of increased concerns about centralization in BCH and because the branding of this coin has been unable to establish the definite distinction between itself and Bitcoin, the trust of investors in this cryptocurrency often tends to be on the lower side of the spectrum.

The main issue is  the lack of high rates of adoption, No matter how efficient the blockchain network itself is, the cryptocurrency will stagnate after a point if it is not utilized across various use cases, High adoption is essential to drive the growth of any cryptocurrency and the lack of that is troubling Bitcoin Cash for a while now.

Ripple is frequently used as a cross-border payment protocol and Bitcoin enjoys acceptability from a substantial number of vendors, A quality like one of these is missing in Bitcoin Cash, as it does not enjoy any degree of mainstream adoption, Bitcoin Cash is still in the shadows of Bitcoin, Competing with other Bitcoin forks.

Because it’s a fork of the Bitcoin network and shares many aspects with it, users regarded it as a fake coin or a copycat, This is quite far away from the truth as this is a real coin that offers advantages that BTC can’t, BTC has centralized development (BitcoinABC), Blockchain size is on the big side (164GB+).