When Bitcoin serves as a digital currency, Ethereum represents a decentralized platform which runs smart contracts, These are described as applications which run exactly as programmed without any possibility of fraud, censorship, downtime, or third-party interference, In contrast to online projects with other types of cryptocurrency, ETH transactions do not require third parties, It is a full package service, so, it is possible to conclude very complex agreements.

Ethereum is a decentralized platform for money & new kinds of applications, you can write code that controls money, and build applications accessible anywhere in the world, Ether can be transferred between accounts, It is a token whose blockchain is generated by the Ethereum platform, & It is used to compensate participant mining nodes for computations performed.

ETH is a well-planned project, Ethereum comes with a great roadmap of where they want to be in years 3 to 5, and they are implementing it with a strict rigor of which the community is proud of, This is a platform with a clear vision of where it wants to go, The Ethereum Enterprise Alliance (EEA) is working with dozens of enterprise-grade companies in all verticals from banking to healthcare, Only Bitcoin can match this level of corporate buy-in, No other crypto-coins have this much corporate clout. 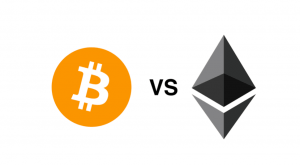 Ethereum is a platform rather than a digital currency, Much like Bitcoin and Bitcoin Cash, Ethereum has also gone through its internal disagreements, Ethereum Classic (ETC) is perhaps one of the popular alternatives to Ethereum, Ethereum Classic is the result of a hard fork which split the network in two.

Another popular alternative to Ethereum is NEO, The NEO blockchain is perhaps the first one to be launched as a dedicated, open-source blockchain-based project in China and is commonly referred to as the “Chinese Ethereum”, Stratis (STRAT) is also a platform which competes with Ethereum, It supports C# compatible with the Microsoft .Net framework, The network is designated to offer end-to-end for C#-based blockchain applications.

Bitcoin can be sent from user to user on the peer-to-peer bitcoin network without the need for central authority or banks, It is a decentralized digital currency without a central bank or single administrator,  Transactions can be verified by network nodes through cryptography & recorded in a public distributed ledger called a blockchain.

Bitcoin can be used in illegal transactions, It is created as a reward for a process known as mining, It can be exchanged for other currencies, products, and services, it comes with high electricity consumption, price volatility, thefts from exchanges, Bitcoin is used as an investment, although many regulatory agencies have issued investor alerts about bitcoin.

There are many alternatives to Bitcoin, the largest one of them is Bitcoin Cash (BCH), Bitcoin Cash is the result of a hard fork (network split) which took place on August 1st, 2017, In a nutshell, a group of members of the Bitcoin community wanted to increase bitcoin’s block size, The resulting change caused the network to split in two.

When it comes to Bitcoin VS Ethereum, At the core of both Bitcoin and Ethereum is blockchain technology, Both Ethereum and Bitcoin have their own distinct consensus algorithms, so, the ways they verify the validity of the information being added to the ledger are different.

Bitcoin mining depends on the so-called Proof of Work (PoW) algorithm, Within this concept, the probability of one mining a block is based on the amount of computational work he has done, The mining reward will be given to the very first miner who manages to solve a complex cryptographic puzzle of each block.

Ethereum mining is based on another algorithm called Proof of Stake (PoS), The probability of validating a new block within this consensus algorithm is determined by how large of a stake a certain person holds, or, in other words – how many coins does he have, Within the PoS algorithm, block validators don’t receive a block reward – they instead collect network fees as their reward.

In the case of Ethereum, the reward is called gas, With PoS there are no mathematical puzzles to solve and the creator of the new block is chosen in a deterministic way, Ethereum has faster block time, the amount of time necessary to validate a block, Bitcoin’s average block time is a little bit more than 8 minutes, Ethereum’s block time is 25 seconds.

Bitcoin price has peaked at around $20,000 in early January 2018, This marked the culmination of a historic price rally which took place throughout the entire 2017 and especially towards its end, At the beginning of 2017, BTC was trading at around $900, hence increasing its value more than 20 times by year-end, ETH had a remarkable 2017, as the cryptocurrency peaked at around $1,400, starting from merely $10 at the beginning of the year, This marked a 140x increase, which was far more than Bitcoin’s price improvement.