Ethereum is an open platform that enables developers to build & deploy decentralized applications (dApps), The easiest way to think of Ethereum is as a programmable Bitcoin, Ethereum allows participants to run decentralized blockchain applications called smart contracts, Smart contracts are highly secure, and run with the perfect digital history, making them auditable, trustless & unstoppable, These smart contracts can be programmed without any chance of downtime, censorship or fraud.

Ethereum is the second-largest cryptocurrency by market capitalization, Ethereum is a platform and it is not a currency, It has its own digital currency called Ether (ETH), Ether was designed to be much faster than Bitcoin with its block time around 15 seconds, compared to BTC’s 10 minutes, Unlike Bitcoin, there is currently no hard cap on the amount of ETH coins that can be mined.

Ethereum (ETH) is an open-source computing system that aims to democratize the way the internet is run, and the way that global data is stored, by using decentralized applications, Ether is the cryptocurrency designed for the operation of Ethereum and is used to ‘pay’ miners who mine Ether coins which, like other cryptos, are recorded in a decentralized, publicly distributed Blockchain.

Ethereum was launched back in 2015 and it’s by far the largest open-ended decentralized software platform which allows the creation of Distributed Applications (dApps) and Smart Contracts, Individuals, country or organization can’t control the blockchain, The Ethereum Network is distributed between thousands of individual computers in many countries, All transaction are viewable by everyone. 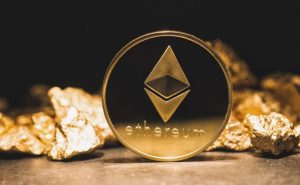 Ethereum can be easily accessed by its native browser, The browser will offer a user-friendly interface as well as a digital wallet for trading and storing ether, Some of the applications developed on Ethereum are given as follows:

Gnosis is a decentralized prediction market that allows the users to vote for anything from the weather to the election results, The users have the choice of voting what they want to, EtherTweet is an application that will provide the users with an uncensored communication platform from the functionality of Twitter.

Ethlance is a freelance platform used to exchange the work for Ether rather than any other currencies, Alice platform can bring transparency to social funding & charity, It can be done using blockchain technology, Augur is an open-source prediction market that rewards correct prediction.

Ethereum has surpassed Litecoin in popularity & It is now the most used cryptocurrency behind Bitcoin, Ethereum boasts faster processing speeds due to smart contracts, digital “if-then” agreements, Ethereum can create a platform for the complex contracts to run on the network by allowing for a Turing complete language on the blockchain, there will be no third parties interference in many cases, This makes Ethereum more special & powerful than a lot of other blockchains.

It is very rich in corporate clients, So, in recent times, the price of Ethereum has rocketed, The Ethereum Enterprise Alliance is collaborating with many companies in all verticals from banking to healthcare, there is no other cryptocurrency that can fight with the Ethereum, Ethereum is well planned about its reach after four years, So, it is implementing that roadmap rigorously, This is a platform with a clear vision of what it wants to achieve.

Ethereum is not a self-locked system, so, other goods and services can grow together with ETH blockchain, It makes ETH grow continuously, More & more people start to invest in ETH, Ethereum is an open system & It is a big advantage of this blockchain, Everyone from outside can join this project, so, it possible to develop this ecosystem & improve it, Ethereum transaction fees are lower, so, it really beneficial to invest in initial coin offering projects using this crypto money.

ETH has huge support from a business community, Medium-sized companies and large corporations help to improve the work of the system, Ethereum Enterprise Alliance & Hyperledger monitor the development of the project continuously, Ethereum platform benefits from all the properties of the Blockchain technology that it runs on, It is completely immune to any third party interventions, so, all the decentralized apps can’t be controlled by anyone at all.

Any Blockchain network is formed around a principle of consensus, so, all the nodes within the system need to agree on every change made within it, This eliminates possibilities of fraud, corruption & makes the network tamper-proof, Ethereum platform is decentralized, so, there is no possible single point of failure, all the apps will always stay online & never switch off, the decentralized nature & cryptographic security make the Ethereum network well protected against possible hacking attacks & fraudulent activities.

Disadvantages of the Ethereum Blockchain

Ethereum is not a platform that is as efficient as other faster cryptocurrencies, The speed of transactions is not very good, Many trades have suffered from this disadvantage, Ethereum is not a master in the documentation that allows the people become developers, Most of the online content is not updated and out of date, it does not cover the basics.

There will be upgrades all the time & this moves from a proof of work platform to a more efficient platform, This is a tricky and risky upgrade which will make the developers always busy, Ethereum will be slower than traditional computer processes, due to its distributed architecture, it works from a number of computers, there is no offline Ethereum, No Internet, so, no Ethereum.

Although there is no limit to the size of data that can be stored on the blockchain, the price of writing the data can be exorbitant, It is not practical for large data, This is why Swarm and IPFS are used, as they are cost-effective, There are not enough tutorials, It is difficult for newcomers to start work with ETH blockchain, They can find some basic information online, It is why many stakeholders can’t engage in this project, These disadvantages stop people from investing in ETH.

ETH has too many platforms, It is the biggest minus of this crypto-money, It is a platform that is a ledger, a smart contracts generator and much more, It makes this platform weak, There are some breakdowns in the system, In order to upgrade ETH to a new level, this blockchain will switch from being Proof of Work to Proof of Stake, It is difficult to switch the system, If this change does not go smoothly, the whole system can crash.

‘The DAO,’ which is a name of a particular DAO launched on April 30, 2016, was attacked and more than 3.6 mln Ether tokens were stolen from it, The attacker exploited a ‘recursive call bug’ in the code, essentially just draining the funds from DAO into a ‘child DAO,’ that had the same structure as The DAO.

Ethereum is a platform, and thus will never be seen as efficient as other faster blockchains, Many complain at the speed of transactions for its cryptocurrency ETH, The roadmap instills major upgrades all the time it seems, and this includes moving Ethereum from a proof of work platform to a more efficient proof of stake one, So, daily attacks will happen on the blockchain by rogue hackers.