The strong winds from the hurricane can contribute to the agricultural sector in the long run , It will cause the topsoil to be distributed to the areas in which it was lacking , By the redevelopment of infrastructure , the property value and the living conditions in some areas will improve .

The hurricane helps to bring the people together , It can lower the temperature , It can help to build up the coastal areas of the islands , making the island wider , The winds can oxygenate the near surface waters and they help life to return to the areas where the red tide once existed . 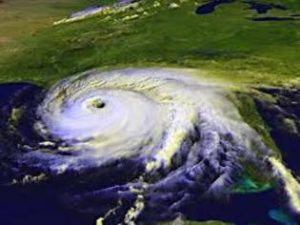 The hurricanes make up an important part of the yearly rainfall budget in many places such as the Southeast U.S. and Japan , It is rare for the moisture from these storms to make a difference in the inland locations , like Indiana .

The hurricanes are usually seen as terrible destructive forces of nature , They are an integral part of the nature , The life in the hurricane-prone areas has evolved to adapt to these great storms and benefit from them .

The hurricanes and the tropical storms can bring drought-busting rains , They can perform the same cleansing function in maintaining the conditions needed for healthy coastal forests , particularly in swampy mangrove forests .

Intense rainfall of the tropical cyclones causes high soil runoffs , It causes high sediment levels being deposited in the estuaries threatened by rising the sea levels , The hurricane storm surges carry the substantial amounts of sediments and nutrients in the coastal marshes .

The hurricanes cause little long-term damage to the marshes , While foliage may be stripped , Stimulation from new nutrients that brought by the hurricane returns the marshes to their original condition quickly .

The hurricanes can break up bacteria and red tide that lurk in the water , As the tropical cyclones move across the ocean , the winds and the waves toss the water’s contents , The tropical cyclone rain is too much of a good thing for any drought area .

The hurricanes provide the Global Heat Balance , One of the main purposes for hurricanes around the globe is the temperature balance between the poles and the equator , Tropical cyclones help transport heat from the equator towards the poles .

The tropical cyclones can move warm tropical air away from the equator and towards the poles , The typical cyclone releases the heat energy of about 50 to 200 exajoules a day , That’s equivalent to 70 times our worldwide energy consumption .

The imbalance of temperatures will exist due to the orientation of the polar axis of our planet , Earth’s equator receives more solar energy , called the insolation , than any other latitude , The insolation warms the ocean temperature that warms the air above it and keeps it warmer long into the autumn .

The Earth is trying to spread this warm wealth around the world and the hurricanes are one of the ways this is done , Mid-latitude storm systems and oceanic currents are others .

The hurricanes are very efficient movers of equatorial heat due to their size and interactions with the upper levels of the atmosphere , The equator would be warmer and the poles could be cooler if the tropical cyclones did not exist .

This oceanic heat is not simply extinguished after being removed from the ocean , It is slowly wrung out in the thunderstorms as the hurricanes move pole-ward , The cold water left behind in the hurricanes can weaken new hurricanes that pass over that same area .

The barrier islands get replenished as a hurricane moves through , The tropical cyclones cycle the nutrients from the seafloor of the ocean to the surface by stirring the ocean , boosting the ocean productivity and setting the stage for blooms of marine life .

The hurricanes have the power to pick up the substantial amounts of sand , the nutrients & the sediment on the ocean’s bottom and bring them toward those barrier islands , The storm surge , the wind and the waves will move these islands closer to the mainland as the sand is pushed or pulled in that direction .

Without the tropical cyclones or the artificial restoration , the barrier islands would shrink and sink into the ocean , The hurricanes can do immense barrier island damage , but it can bring some beneficial sand to the coast .

The hurricanes replenish inland plant life , Their wind blows the spores & the seeds further inland from where they would normally fall , this effect can be seen a thousand miles inland as the storms move away from the shoreline , These seeds can replenish lost growth after the fires and the urbanization .

Hurricanes cause the destruction to the infrastructure , loss of lives , vegetation , and livestock , A lot of hurricanes cause the floods , that can wash away homes and people , Strong winds can destroy large trees and buildings , or use the objects as missiles which can cause great damage .

The great loss of life resulting from the hurricanes mean that the labor force will be decreased , The great destruction of vegetation and livestock means that the countries will have to source more of their food from the other countries .

During the natural disasters , the social and economic aspects of the country will be negatively affected , It can lead to increased illnesses and social problems , The tropical cyclones are notorious spreaders of non-native invasive plants such as a damaging fungus called soybean rust .

The families will be separated , disrupting the socialization of many , The jobs will be lost and the economy will take a hit , The countries will receive loans from various international institutions , This money should not only be used to repair damages caused by the disasters .

The Flood advantages and disadvantages