Thunderstorms are small, intense weather systems that make strong winds, heavy rain, lightning, and thunder, They serve to cool the earth, They create rainfall and remove the pollution from the air, They are a direct result of the atmospheric heating and the increased air convection.

Thunderstorms offer water to the vegetation and also to the lakes and the reservoirs, They can happen anywhere with two conditions which are the air near the Earth’s surface must be warm and moist (with lots of liquid), and the atmosphere must be unstable.

The storm winds distribute the seeds and the pollen, they help remove the old and weak vegetation and so they make way for new growth, The lightning strikes liberate nitrates that fertilize the soil, The lightning produces about 20 percent of the nitrogen to the soil per year.

The updrafts and other wind effects remove large amounts of pollution, transporting it aloft, The storm rainfall washes the pollution out of the air, The thunderstorms are very active electrically, and the Lightning is an electrical discharge which happens between two opposite charged surfaces. 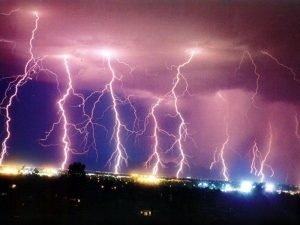 Although thunderstorms are dangerous, They are also a great blessing, They can be a great help to man and all living creatures, We get lots of water for many continents during the summer, The rain from the thunderstorms washes away many of these pollutants out of the air.

Without the thunderstorms, many continents would become dry, The fish would die, The crops would fail, and the animals would die, They help our earth maintain its electrical balance because the lightning helps transfer the negative charges back to the earth.

The lightning helps fertilize the soil, The heat and the pressure from the lightning turns nitrogen and other gases in the air into useful compounds that are a natural fertilizer which help the plants make vital proteins, And it produces the ozone that is a vital gas in our atmosphere.

The sudden flash floods that happen because of heavy rains are the biggest reason for weather-related deaths, The lightning that happens with all the thunderstorms makes thousands of forest fires each year, The lightning kills many people, and it injures hundreds of people a year.

The streams and the rivers cannot carry all the water, so they flood, The most severe flash flood makes the water level rise dangerously in the streams, the dry places, or the canyons, The flash floods can make terrible mudslides and they can move very quickly, They can roll big rocks, They tear out the trees, and they destroy the buildings and the bridges.

How can you keep safe in the storm?

You should stay away from the water because the water conducts electricity, You should not stand on the hilltop, Try not to be the tallest object, If the lightning comes near, try to find shelter in the house, the car, or in the low place under some small trees but not in a shed, inside a house.

You should stay out of low places if there is a flash flood, The cars should not be driven through the water that is flowing over a road or bridge, The flowing water can push a car right off the road or the bridge, It takes two feet of water to float most cars.

The road under the water might have been washed out, leaving a deep hole, The flash flood can easily turn over a car and trap everyone inside, So, if your car stops in the floodwaters, You have to get out as fast as possible and run to higher ground.

The Flood advantages and disadvantages