Crossing star theory, Modern theory of the world and difference in length of day & year

The assumptions of the crossing star theory assumed that the solar system was originally the Sun, A huge star approached to the Sun, This star attracted the Sun to it which led to a great expansion in the part of the Sun facing it.

This expanded part was exploded which led to a gaseous line was formed of a great length from the Sun, and the Sun escaped from the gravity of that star, The gaseous line started to condense due to the attraction force, then it cooled forming the planets.

The modern theory of the world (Alfred Hale 1944)

The scientists sometimes observe a star greatly glows for a short time to become one of the most shining stars in the sky, After a day or two, its glowing disappears gradually to return to its normal nature.

The reason for that glowing is not known, It may be due to the explosion of the star as a result of the nuclear reactions that occur in it suddenly and violently.

The star bombs huge amounts of gaseous materials when these reactions occur, then its size increases, when the bombed gases are cooled, the star shining returns as it was, Alfred Hale used this fact to develop his assumptions about the solar system evolution. 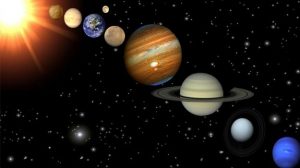 Alfred Hale assumed that the solar system was originally a star rather the Sun, A star was rotating near the Sun, The star exploded due to huge nuclear reactions, The force of the explosion led to the bombing of star’s nucleus away from the gravity of the Sun, A cloud of gas remained.

The gaseous cloud subjected to cooling and contraction processes forming the matter of planets then the attraction force of the Sun controlled the orbits of planets around it.

The Earth’s year = 365.25 Earth’s day, The Earth day = 24 Earth’s hour, There are many factors controlling the difference in the length of the day and year from one planet to another.