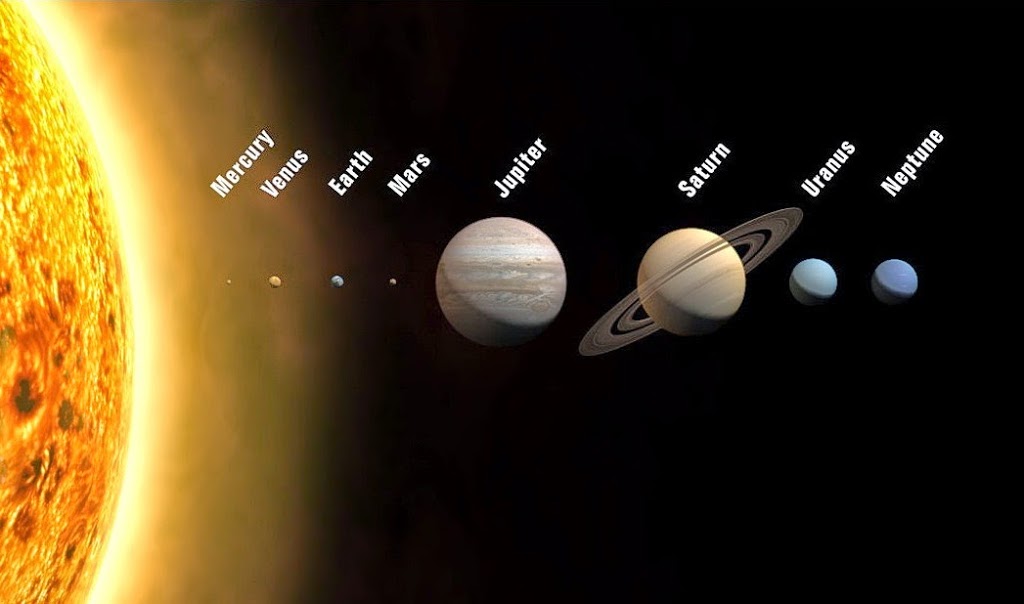 The galaxy that our solar system belongs to is known as “The way of chopped hay galaxy” or “The Milky Way galaxy” It takes an oval shape with coiled spiral arms extending from it, and the Sun lies on one of these spiral arms. The solar system consists of the Sun, the Planets, the Moons, the Asteroids, the Meteors, the Meteorites & the Comets.

The planets are eight spherical opaque bodies that revolve around the Sun in one direction (counterclockwise), They are arranged according to the distances from the Sun as follows: Mercury, Venus, Earth, Mars, Jupiter, Saturn, Uranus, Neptune. They revolve around the Sun in semi-circular or elliptical (oval) orbits, The orbits of the planets lie in one plane perpendicular to the Sun’s axis of rotation around itself.

Mercury and Venus have no Moons revolving around them. Earth has one moon. Mars has two moons. Jupiter has 62 moons. Saturn has 60 moons. Uranus has 27 moons. Neptune has 12 moons.

The Moons which are the small planets (the satellites) that are affected by the gravity of the larger planets and rotate around them.

When the small rocky masses fall within the atmosphere of the Earth, These masses could burn up completely as a result of the heat produced from their friction with the air. leading to the formation of luminous arrows in the sky. these objects are called ” Meteors”.

The Meteors are luminous arrows that can be seen in the sky due to the complete burning of small rocky masses in the Earth’s atmosphere. Meteors can be seen with the naked eye on clear nights.

The Meteorites are the remaining part of the rocky masses without burning that fall on the surface of the Earth. The biggest meteorites till now have a mass of 80 tons and exist in the south west of Africa.

The comet consists of two parts which are: The head which contains icy spheres that are a mixture of solidified gases, rocky parts, dust, and water molecules. The Tail which considered a gaseous cloud.

The comets which are masses of rocks, ice, and solidified gases that revolve around the Sun in more elongated elliptical orbits intersecting with the orbits of the planets.