The formation and the importance of the soil

The importance of the soil 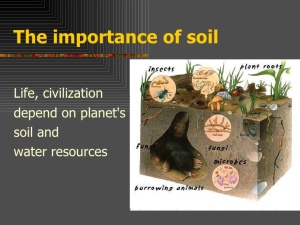 The soil is necessary for all the living organisms

The soil is the main component of the environment as it is necessary for all the living organisms (the plants, the animals and the human), the plants take the minerals and the other nutrients from the soil to live and grow.

The formation of the soil

The factors affecting the soil formation are the climate (the precipitation, the temperature), the vegetation (the plant), the parent material (geological and organic), the organisms (the soil microbes and fauna), the relief (the configuration of the surface).

How was the soil of Egypt formed?

The origin of the soil of Egypt is the rocks of the Ethiopian Plateau, when they are exposed for millions of the years to several factors ( as the heat, the winds, the rains and the running water), they are broken into the small particles with different sizes and shapes.

The flood water carried these particles of the rocks to the River Nile, then to the Nile Valley, where they are deposited year after year as the layers of the clay and the silt.

The clay and the silt are very important components for the soil as they are rich in the elements that are necessary for the plant growth.

The soil layers and the living organisms

What are the components of the soil?