What are the components of the soil? 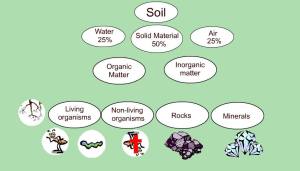 The soil is a thin non-compacted superficial layer which covers the Earth crust, and it is a very important part of the environment, There are different types of the soil that are different in color and texture.

Where the color of the soil helps the scientists to identify the elements and the minerals inside it and the texture of the soil is smooth or granular or rocky rough.

The soil is made of many components such as the water, the air, the silt, the humus and pieces of rocks (which is composed of the sand, the clay, the minerals and the gravels).

The main components of the soil are the sand, the humus and the clay, The variation in the types of the soil depends on the type of the rocks and the minerals.

The rocks are the main source of the sand and the clay which are the main components of the soil, The humus is the decayed remains of the animals and the plants mixed with the soil components, and its color is dark brown or black.

How is the humus formed?

When the living organisms (the plants or the animals) die, their bodies decay forming the humus, So, The animals and the plants affect on the soil composition.

The formation and the importance of the soil

The soil layers and the living organisms