What is the meaning of the weather?

The weather is the expected conditions of the atmosphere in a certain area during a short period of time, not exceeding one week, Every day, You can know the weather news through the weather forecast.

The weather forecast includes the weather factors which are: The temperature, The winds, The atmospheric pressure, the clouds, and the rain. 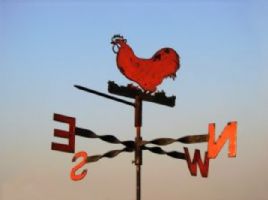 The wind vane is used to determine the wind direction.

The rise of the sea waves is caused by wind speed. The wind direction is determined by the wind vane, and the wind speed is measured by the anemometer.

The clouds and the rain

When you look at the sky, you notice that the clouds increase in the coastal regions, and the sky is clear in the desert regions.

The clouds are formed when the water in the seas, the lakes, and the oceans evaporate by the effect of the sun rays to form the water vapour. which rises in the sky, then it cooled and condensed to form clouds.

The rain is formed when the clouds move by the effect of the winds, and the volume of the water drops in the clouds increases, then the air can not carry them, So the rains fall.

The importance of the weather prediction

People should follow the weather forecast as it gives them the prediction of the temperature, the pressure, the rain, the winds, and the clouds.

The wind power advantages and disadvantages