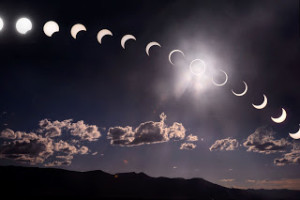 The lunar eclipse can be easily seen from the surface of the Earth, As it lasts for an hour or two hours, in which the surface of the moon gets colored red and then returns to its original natural color. When the Earth passes in front of the Sun it forms two types of shadow which are:

The semi-shaded (Penumbra) lunar eclipse which occurs when the moon enters the semi-shaded area only (the penumbra) of the Earth in which the moonlight turns to be faint without being darkened.

There is no annular lunar eclipse because the Earth has a great size relative to that of the moon. So, it always blocks all the sunlight when it comes between the sun and the moon.

You can watch the Lunar eclipses, They are completely safe to watch, You do not need any kind of protective filters. It isn’t even necessary to use a telescope.

It does not require the precautions, the warnings, and the special devices to observe it because it does not cause any harm to the eye.