When you look at the sky in a clear moonless night, you will see a huge number of bright bodies called Stars. Stars are big-sized bodies that emit enormous amounts of heat and light. They appear small although they are big-sized because they are millions of kilometres away from us. The distance between stars are very large, so astronomers don’t measure them in kilometres, but with the Light year. Light year is the distance covered by light in one year and it equals 9.467 × 1012 km. 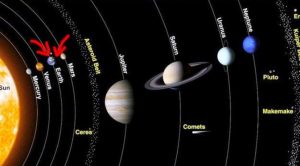 The stars are found in groups called Galaxies. Galaxies are the greatest units that form the universe. They are a tremendous collection of stars. They are a system that consists of thousands of millions of stars. Our solar system belongs to the way of Chopped Hay galaxy or the Milky way galaxy.

The arrangement of planets

According to their distances from the Sun (beginning from the nearest to the farthest) as follows: Mercury – Venus – Earth – Mars – Jupiter – Saturn – Uranus – Neptune.

According to their sizes (beginning from the biggest to the smallest) as follows: Jupiter – Saturn – Uranus – Neptune – Earth – Venus – Mars – Mercury) Smallest

The planets of the solar system are divided into two groups according to their distances from the Sun, which are the small or inner planets group, the big or outer planets group.

The small or inner planets group

The nearest four planets to the Sun are Mercury, Venus, Earth, Mars, so, they are called the inner planets group. They are small, so they are called small planets. They are rocky bodies that have a solid surface. Their densities are high (ranging between 3.3 to 5.5 gm/cm³) because they consist of solid bodies. All of them have an atmosphere except Mercury. Mercury and Venus have no moons. The Earth has one moon, while Mars has two moons rotating around them.

The big or outer planets group

The farthest four planets from the Sun are Jupiter, Saturn, Uranus, Neptune, So, they are called the outer planets group. They are big, so they are called giant planets. They are gaseous bodies that are formed of gaseous elements in a solidified state (the most important of them are hydrogen and helium). Their densities are low (ranging between 0.7 to 1.3 gm/cm³) because they consist of gaseous bodies

All of them have an atmosphere. They have a large number of moons rotating around each of them. The presence of hydrogen gas in a solidified state on the surface of outer planets due to the high pressure and extreme coldness on the surfaces of these planets.

The difference of gravity acceleration on the surfaces of the planets

The scientist Isacc Newton was the first one who discovered the Earth’s gravity force when he was standing under a tree and he found an apple falling down to the ground. Then he proved that there is a force of gravity (attraction force) between any two objects in the space.

The forces of gravity depend on the mass of each object (directly proportional) and the distance between them (inversely proportional). The force of gravity differs from a planet to another according to the difference in its mass, where the gravity of the planet increases by increasing its mass and vice versa.

The gravity on the Earth’s surface is larger than that on the Mars surface because the mass of the Earth planet is larger than that of the Mars planet and the force of gravity is directly proportional to the mass. Acceleration due to gravity is the largest on Jupiter planet, while it is the least on Mars planet. The Earth has the largest gravity on its surface in the inner planets.

The belt of the wanderer asteroids is the region that separates the group of the inner planets from the group of the outer planets. Some of these rocky masses may emerge from their orbit around the Sun and swim in space, but some of them penetrate the Earth’s atmosphere in the form of meteors and meteorites.

Meteors are small rocky masses that burn up completely when fall within the atmosphere of the Earth as a result of the heat produced from their friction with air and they can be seen as luminous arrows by the naked eye.

Sometimes, we see some luminous lines in the sky at clear nights due to the burning of small rocky masses when they penetrate the Earth’s atmosphere as a result of heat produced from their friction with air forming meteors.

Comets are masses of rocks, ice and solidified gases that revolve around the Sun in more elongated elliptical orbits intersecting with the orbits of the planets.