Reflecting telescopes and their advantages & disadvantages

Reflecting telescope uses a mirror to collect the light instead of a lens, This overcomes the problems inherent in supporting the lens in a refractor telescope and the light losses due to the light passing through thick pieces of glass, and the mirror of a reflector is at the bottom end of the telescope tube.

Curved mirrors can bend the light and make parallel light rays converge to a focus, This focus is directly in the path of the incoming light, So, there are several ways of making images from the mirror visible, One is called a Newtonian reflector where a flat mirror is used to point the light rays out to an eyepiece.

There are many types of reflectors that solve the issue of where to focus the light in different ways such as Cassegrain reflectors which have a convex secondary mirror and a hole in the middle of the primary mirror. 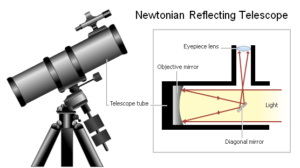 Prime focus telescopes have no secondary optics and the observer or camera observes the image from near the focal point, Coude telescopes use a convex secondary mirror like a Cassegrain and an angled mirror like a Newtonian reflector to move the light rays to a focal point away from the telescope, This arrangement is useful when optical equipment is being used that is too heavy to mount directly on the telescope.

The reflectors are used not only to examine the visible region of the electromagnetic spectrum but also to explore both the shorter- and longer-wavelength regions adjacent to it, The primary mirror reflects the light back to a focus instead of refracting it, The primary mirror usually has a concave spherical or parabolic shape, as it reflects the light, it inverts the image at the focal plane.

Reflecting telescopes are not subject to the chromatic aberration because the reflected light does not disperse according to the wavelength, and all the wavelengths will reflect off the mirror in the same way.

Telescope tube of a reflector is shorter than that of a refractor of the same diameter which reduces the cost of the tube, and they are easier and cheaper to build large, They are also easier to mount because the back of the mirror can be used to attach to the mount.

Mirrors in modern telescopes are made in various shapes to correct for the errors, Some telescopes use a combination of mirrors and lenses, Schmidt-Cassegrain telescopes use a spherical mirror with a correcting plate that corrects the focus.

The reflector telescope uses a mirror to gather and focus the light, All the celestial objects (including those in our solar system) are so far away that all of the light rays coming from them reach the Earth as parallel rays.

The reflector telescopes are fairly compact and portable which are great for transportation and storage, They are also generally more affordable (particularly as the mirrors are cheaper to produce than the lenses), And the mirrors can produce less optical aberrations than the lenses.

It is easy to get the optics out of alignment, The reflector telescope’s tube is open to the outside and the optics need frequent cleaning, Often a secondary mirror is used to redirect the light into a more convenient viewing spot, The secondary mirror and its supports can produce diffraction effects, The bright objects have spikes.

Different reflectors use different shapes of mirrors, The parabolic mirrors will focus all incoming light rays to a single point, The images from a parabolic mirror will have a defect called the coma, where images far from the center of the field of view are elongated, The spherical mirror surface is relatively easy to make but different parts of a spherical mirror have slightly different focal lengths, so, The images will be fuzzy.

Mirrors may need regular re-alignment as they can easily slip out of alignment due to knocks and bumps or even the temperature changes, They can be susceptible to the spherical aberrations which can interfere with the image quality unless the mirrors and other optics are kept at the same temperature as the outside air , There will be the air currents inside the telescope that will cause images to be fuzzy.

The light enters at one end, It is then reflected by a concave-shaped primary mirror at the other end towards a smaller mirror known as the secondary mirror, This mirror reflects the light into an eyepiece which is usually mounted on the side of the telescope, and the eyepiece can be adjusted to alter the sharpness of focus.

What are the advantages and disadvantages of Refracting Telescopes?

Observing the space and the invention of Telescopes

What are the uses & importance of Microscopes?