The solar eclipse phenomenon occurs when the Moon passes between the Sun and the Earth casting its shadow on the Earth’s surface, where the moon, the Earth, and the Sun are nearly on one straight line with the moon in the middle.

The type of solar eclipse changes according to the distance between the Moon and the Earth during its rotation in its oval shape orbit around the Earth.

Although the solar eclipse does not last more than seven minutes and forty seconds, we can observe more than one type of solar eclipses occurring during the moon’s passage in front of the Sun’s disk and the part of the Sun that it hides from the Earth. 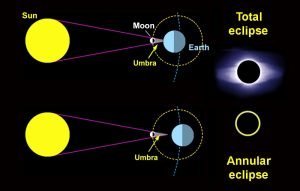 We must not look directly at the Sun on ordinary days, Due to the harmful rays emitted by the Sun like ultraviolet rays (UV) and infrared rays. These harmful rays affect the eye, especially the retina and may cause blindness within a few minutes.

Although the glowing of the Sun during the solar eclipse seems weak, we must not focus on looking directly at the sun. Because the outer solar corona keeps on emitting harmful rays to the eye like ultraviolet rays (UV) and infrared rays.

You can poke a hole into a piece of paper or cardboard and then look at the protected image, You need a special filter to properly view from a camera, binoculars, or the telescope. just looking at the digital screen should be fine. But looking through the viewfinder is dangerous.

What are the advantages & disadvantages of Refracting Telescopes?