What are the advantages & disadvantages of Refracting Telescopes?

The telescope is an instrument that collects and analyzes radiation emitted by distant sources, The most common type is the optical telescope, It is a collection of lenses or mirrors that are used to allow the viewer to see the distant objects more clearly by magnifying them or to increase the effective brightness of a faint object.

The telescopes can operate at most frequencies of the electromagnetic spectrum, from radio waves to gamma rays, The one characteristic all telescopes have in common is the ability to make the distant objects appear to be closer.

The advantage of using a telescope in space is that you don’t have to look through the Earth’s atmosphere, For very detailed observations the atmosphere is pretty murky and horrible, You have probably seen HST pictures, and they are much more detailed than you can get from the ground.

The disadvantages are mainly to do with the hassle of operating in space, It is much more expensive, so, you can’t have such a large telescope, If things go wrong, It is much harder to repair them, You can’t update the instruments, So, they quickly become out of date, Also with the modern technique of Adaptive Optics, ground-based telescopes are catching up with the HST.

The telescope is an instrument used to see the objects that are far away, They are used to view the planets and the stars, Some of the same optical technology that is used in the telescopes is also used to make the binoculars and the cameras, There are three main types of telescopes which are the refracting telescopes, the reflecting telescopes & the catadioptric telescopes. 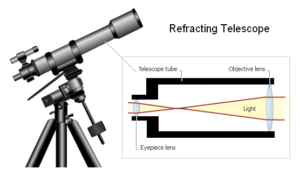 Refracting telescopes use lenses to bend the light to a specific focal point such that the object will be magnified to the viewer, It is the simplest type of telescope and the most recognizable, Its design is very simple, It is essentially a tube with a lens at each end.

The basic refracting telescope has two lenses, The first lens is called the objective lens which is a convex lens that bends the incoming light rays to a focal point within the telescope, The second lens is called the eyepiece which takes the light from the focal point and spreads it out across the retina of your eye, It makes the object seem much closer than it really is.

Because of their simple design, they are generally easy to use and more reliable as their optics are permanently fixed and aligned, They are superior revolving power per inch of aperture and superior performance in inferior conditions and they have image steadier.

There are not reflections or interruption of the light path, there is near permanent optical alignment, minimum maintenance, and long focal ratios can mean the use of longer focus, simpler and eyepieces, Refractor telescopes are rugged after the initial alignment their optical system is more resistant to misalignment than the reflector telescopes.

The glass surface inside the tube is sealed from the atmosphere, so, It rarely needs cleaning, Since the tube is closed off from the outside, The air currents and effects due to changing temperatures are eliminated, This means that the images are steadier and sharper than those from a reflector telescope of the same size.

They can be heavy especially larger aperture telescopes because of their need for large lenses, They can also have a longer body which may impact on transportation and storage, and there is a certain amount of secondary spectrum (chromatic aberration) unavoidable (the reflector completely free of this).

They may be more expensive as large high-quality lenses are more costly to produce, The cheaper lenses are more susceptible to aberrations, They have very high initial cost relative to the reflector telescope.

All refractors telescopes suffer from an effect called the chromatic aberration that produces a rainbow of colors around the image, One way to reduce this problem is to use the multiple compensating lenses to counteract the effects of this kind of aberration.

There is another way which uses a very long objective focal length (which is the distance between the focus and the objective) to minimize the effect, This is why the early refracting telescopes were made very long.

There is another problem which is the shape of the lens, It is technically difficult to make a glass lens with no imperfections inside it with a perfect curvature on both sides of the lens.

Refractor telescopes (as well as the reflector ones) can suffer from a defect called the spherical aberration so that not all of the light is focussed on the same point.

How a Refracting Telescope Works

Refracting telescopes are very simple, It uses a lens to gather and focus the light, where the light enters through a main objective lens at one end, then the lens refracts (bends) the light to a point of focus at the other end, So, This is then magnified to form an image by the eyepiece which is inserted in the other end of the telescope, The eyepiece can be moved back and forth to adjust the sharpness of the focus.

Reflecting telescopes and their advantages & disadvantages

Observing the space and the invention of Telescopes

What are the uses & importance of Microscopes?