Galaxies are groups of stars that rotate together in cosmic space by the effect of gravity, They are the greatest building units that form the universe, Each galaxy has a distinctive shape according to the harmony and order of the groups of stars in it, Galaxies move away from each other as a result of their regular movement.

Galaxies gather in groups called clusters, Galaxies clusters are groups of galaxies that rotate together in cosmic space by the effect of gravity, The galaxy to which our solar system belongs is the Milky Way galaxy, The Milky Way galaxy is given that name because it appears in the sky at night as a splashing milk or spreading straw. 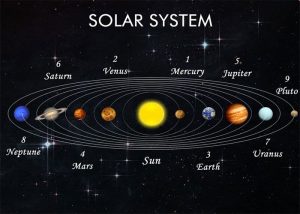 It is considered one of the spiral galaxies. It contains all stars we see at night in the sky. The Sun is a star of millions of stars that rotate around the centre of the Milky Way galaxy in fixed orbits.

In the Milky Way galaxy: The old stars (the older) gather in the centre surrounded by the small stars (the recent) are located in the spiral arms of the galaxy.

When the gravity between the Sun and the planets is vanished, The planets will leave their orbits and float in a random fashion in space, and therefore there will be no solar system.

Measuring the distances between the celestial bodies in the universe

Expansion of the universe

The origin of the universe

How did the universe originate…?

There was no one to relate what happened but the discoveries in physics and astronomy enabled scientists to trace the history of the universe from the first second fraction of its evolution, Many scientists believe that the universe emerged from a massive explosion called Big Bang.

The Big Bang theory assumed that:

Big Bang is a theory that explains the origin of the universe from a massive explosion since 15000 million years and resulted in it all forms of matter, energy, time, and space followed by continuous expansion and changing processes.

Stages of the origin of the universe since the moment of Big Bang:

In 1964, scientists Robert Wilson and Arno Pinzias coincidently discovered radio waves coming from space. They concluded that these waves are a type of echo of the Big Bang which still frequented in the universe. TV sets can receive such signals (waves) on the Earth. These scientists have won the Nobel prize for physics in recognition of the discovery.