Carbon dioxide gas can be toxic and very harmful to humans, It increases the temperature of the Earth’s atmosphere, It causes the global warming effect that has bad effects on the Earth. 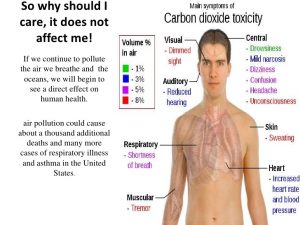 Increasing the percentage of carbon dioxide gas in air causes melting the snow on the tops of mountains and the two poles causing the raise of the level of seawater, so some coastal towns will drown.

Burning of fossil fuels increases carbon dioxide gas emissions, and it causes a gap in the ozone layer which protects the Earth from harmful rays coming from the Sun when the harmful rays enter the Earth’s atmosphere, it raises the temperature of the planet which is known as the greenhouse effect.

Symptoms of carbon dioxide gas toxicity are high blood pressure, headache, flushed skin and twitching the muscles, and at higher levels, man can experience panic, hallucinations, vomited, irregular heartbeat and potentially unconsciousness or even death due to rising of carbon dioxide concentration in the blood and tissues.

Rising the levels of carbon dioxide gas stimulates the sympathetic nervous system which may be dangerous in some patients already having systemic hypertension or myocardial ischaemia.

Increasing the percentage of carbon dioxide gas in the air reduces alveolar oxygen concentration, and it sensitizes the myocardium to externally administered catecholamines.