The solar system consists of the Sun (star), Eight planets (revolving around the Sun in fixed orbits), the comets, the asteroids, and the moons (the satellites of the planets), It was considered as the center of the universe in the past but now we know that our system is a tiny spot compared to the rest of the universe.

The planets and the other bodies were originated in the solar system since 4600 million years ago, The astronomic system (the solar system) extends over 12000 million kilometers in the space.

The gravity in the solar system

The English scientist Isaac Newton was the first one who discovered the Earth’s gravitational force when he was sitting under a tree and he found an apple falling down to the ground. 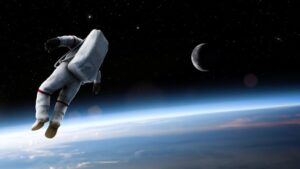 If the gravitational force of a celestial body was strong enough, it will attract the gases towards itself forming an atmosphere around it (even if it was a planet or a moon).

The law of universal gravitation is one of the basic laws of the universe, if there is no attraction force between the Sun and the Earth, The Earth will leave its orbit and float in a random fashion in the space and this leads to the destruction of the Earth.

The continuous force of the Earth’s gravity on our bodies gives us the weight, But when you are inside a lift going downward fast, you feel that you are lighter in weight, If the lift falls (when the wires are cut), you feel weightlessness.

The weightlessness occurs in the spacecraft as the astronauts fall down inside it with the same speed so that they get weightless.