In adults, the amount of iron lost from the body is relatively small. Men lose about 0.6 mg/day, largely in the stools. Women have a variable, larger loss averaging twice this value because of additional iron lost in menstruation. The average daily iron intake is about 20 mg, but the amount absorbed is equal only to the losses.

Almost all iron absorption occurs in the duodenum. Intestinal absorption of iron is regulated by three factors: recent dietary intake of iron, the state of the iron stores in the body, and the state of erythropoiesis in the bone marrow. Organ meats as liver, heart, and kidney and also egg yolk, whole wheat, spinach, and molasses are good sources of iron. and milk is a poor source of iron.

Of the dietary iron, about 10% is absorbed. Most of the iron in the diet is in the ferric (Fe3+) form, but it is the ferrous (Fe2+) form that is absorbed. Gastric secretions dissolve the iron and permit it to form soluble complexes with ascorbic acid that aids its reduction to the Fe2+ form. Therefore iron deficiency anemia is a frequent complication of partial gastrectomy. 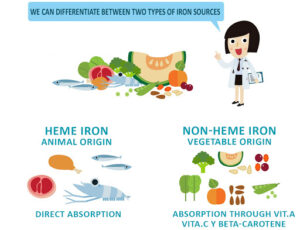 Factors which inhibit iron absorption are:

Mechanism of iron absorption in the duodenum

Transport of Fe2+ into enterocytes occurs via divalent metal transporter 1 (DMT1) in the apical (luminal) side of the cell. Heme is transported to the enterocytes as such by binding to another apical transport protein, heme transporter (HT).

In the enterocyte cytoplasm, heme oxygenase (HO2) removes Fe2+ from the porphyrin of heme and adds it to the intracellular Fe2+ pool. Some Fe2+ is stored in ferritin in the enterocytes, the remainder is transported to plasma by the transporter ferroportin 1 (FP).

Fate of the absorbed iron

Iron released from the mucosal cells enters the portal blood as ferrous (Fe2+) ions. In plasma, Fe2+ is converted to Fe3+ and is bound to the iron transport protein transferrin (TF). The oxidation occurs by serum ferroxidase (ceruloplasmin). The protein-bound iron is 50-150 g/dL, but the total iron-binding capacity (TIBC) is 300 to 360 g/dL. Thus, normally, transferrin is about 35% saturated with iron. Iron is taken rapidly by the bone marrow for hemoglobin synthesis. The remaining iron is stored in the liver as hemosiderin.

The total body content of iron is about 5 g. Hemoglobin contains 3 g of the total body iron (60%). 5 % of total iron is held by a porphyrin combined with proteins, e.g. myoglobin, cytochrome oxidases, catalase, and peroxidase. Iron is stored as ferritin Liver is the main organ for the storage of iron. The plasma iron level varies between 50-150 μg/dL.

Iron is excreted mainly by the faeces either as unabsorbed iron or sloughed intestinal cells.

Iron is important for compounds essential for cellular respiration as hemoglobin and tissue iron (e.g. myoglobin, cytochromes, cytochrome oxidase, catalase, and peroxidase). The remaining iron is present in stored form as ferritin, transferrin, and hemosiderin and used in hemoglobin biosynthesis.

Iron deficiency: This condition may be due to diminished intake, diminished absorption, or increased loss of iron. It is characterized by hypochromic microcytic anemia with decreased protein-bound iron and increased total iron-binding capacity. Iron deficiency anemia is common in infancy as milk is deficient in iron.

Iron toxicity (hemosiderosis): Excessive accumulation of iron in tissues, e.g. spleen, heart, liver, pancreas, and under the skin (hemochromatosis) due to repeated blood transfusion in hemolytic anemia. This condition may lead to bronze diabetes. The condition is characterized by decreased total iron-binding capacity.