We know that there are 20 kinds of amino acids, There are only four nucleotides involved in the structure of both DNA and RNA, There must be at least 20 different genetic codes to specify the 20 amino acids.

If we consider that the genetic code is:

In 1960, there are considerable evidences of a triple code, but reaching which sequence of three nucleotides coded for which amino acid, that was called “codons” in 1955, The smallest theoretical size for a code word in DNA is three nucleotides, So the genetic code is triple.

The genetic code of the amino acid is called “codon”, Codon is a genetic code that consists of three nucleotides on the mRNA strand and represents the code for an amino acid, There is only one codon for the starting of the protein synthesis which is called “start codon” (AUG), There are three “stop codons” (UAG, UAA and UGA) at which protein synthesis mechanism stops and gives a signal. 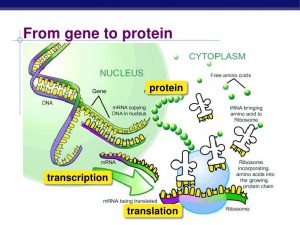 Protein synthesis is a complicated process that includes the interference of several different types of RNA molecules, Synthesis of proteins takes place in three main steps, which are:

The large ribosomal subunit has two sites (peptidyl (P) and aminoacyl (A)), Where tRNA can bind, Methionine is the first amino acid in the polypeptide chain, because the initiation codon on the mRNA is (AUG) which represents the code for methionine found at the site of peptidyl (P).

The polypeptide elongates by a cycle of three steps:

Releasing factor is a protein that binds to the stop codon on the mRNA, causing the ribosome to leave the mRNA and the two ribosomal subunits separate from each other to release the formed polypeptide chain.

Polyribosome is the attachment of one mRNA molecule with many ribosomes that may reach 100 ribosomes and each translates the message, as it moves along the mRNA.