Red blood cells (RBCs) are the most abundant cells of the blood and are necessary for the delivery of oxygen to the tissues, blood is considered a specialized type of connective tissue. The plasma represents the abundant matrix while the formed blood elements represent the cells. However, Blood lacks the fibrous component of connective tissue and its cells originate from the stem cells of the myeloid tissue present in the red bone marrow.

Blood smear (Blood film) is used to examine or count the formed blood elements, a blood smear must be prepared. Stains used in blood smear, Giemsa’s stain are designed to differentiate blood cells by their nuclei and cytoplasmic granules.

The differential leukocytic count is the percentage of each type of leukocytes relative to the total number of WBCs. It is done by counting the different types of leukocytes in the blood smear. This count can be of diagnostic significance as it is associated with certain disease states. 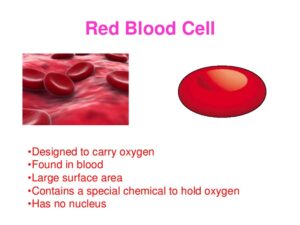 Red blood cells or erythrocytes (erythrum= red, cytes= cells) are so-called because they are responsible for the red color of blood due to their content of hemoglobin. The circulating RBCs are non-nucleated cells as they lack the nucleus. Hence, they are rather called red blood corpuscles than true cells.

It is covered from outside by a prominent glycocalyx coat, which is responsible for the blood grouping. It is supported from inside by a well-developed cytoskeleton, which is responsible for the flexibility of RBCs. It is formed of a network of microfilaments (actin & spectrin), that are attached to the plasma membrane peripheral protein (ankyrin).

Adaptation of RBCs structure to function

The histological characteristics of RBCs are designed to increase the gaseous carriage capacity of these corpuscles. These include:

The myeloid tissue or the red bone marrow is the tissue responsible for the formation of all formed blood elements in postnatal life. The central bone marrow cavity is in young long bones. The marrow cavities are between the bone trabeculae of cancellous bone.

Reticular stromal cells: their function is to produce the reticular fibers and secrete growth factors that stimulate the marrow stem cells. In the yellow bone marrow, these cells are changed to adipocytes by accumulating large fat droplets.

Macrophages: their function includes phagocytosis of aged RBCs as well as the malformed blood elements and storage of iron for further utilization in hemopoiesis. Some adipocytes represent one of the largest cells in the bone marrow.

Pluripotent hemopoietic stem cells (PHSCs) have a great ability to a mitotic division. They are relatively small cells with faint basophilic cytoplasm and vesicular nuclei. When they divide, they give rise to daughter cells, half of which remains as a reserve of the HPSCs population while the other half develops into the more differentiated multipotent hemopoietic stem cells (MHSCs).

These cells are larger and show more basophilia in their cytoplasm as they contain abundant ribosomes that initiate the synthesis of the specific products of each blood element.