Anemia means a deficiency of red blood cells and/or decreased hemoglobin concentration 2 grams below the normal mean for a person, i.e. below 14 g/dl for men and below 12 g/dl for women. Microcytic hypochromic anemias are most often due to iron deficiency in the diet or chronic blood loss with loss of large amounts of iron over a long period.

This can result from several factors: Infections such as malaria, Reactions to certain drugs, e.g. sulphonamides, Autoimmune disorders. The body forms antibodies against its own red blood cells, Hemolytic disease of the newborn: Erythroblastosis fetalis, where the Rh-positive red cells in the fetus are destroyed by antibodies from an Rh-negative mother. Hereditary abnormalities of red blood cells such as sickle cell anemia and favism.

In sickle cell anemia, the cells contain an abnormal type of hemoglobin called hemoglobin-S. When this hemoglobin is exposed to low O2 concentration, it precipitates into long crystals inside the red cells. These crystals elongate and cause the red cells to become sickle-shaped, hemolyze, and form aggregates that block blood vessels. In Favism, Deficiency of glucose-6-phosphate dehydrogenase enzyme. Acute hemolysis is induced by eating fava beans. 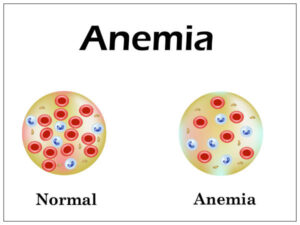 Microcytic hypochromic anemias are most often due to iron deficiency in the diet or chronic blood loss with loss of large amounts of iron over a long period. Characteristics: Red blood cells are small in size (microcytic), The hemoglobin content of each cell is less than normal (hypochromic), and the red cell count is slightly reduced.

Lack of these vitamins causes abnormal and diminished DNA and, consequently, the failure of nuclear maturation and cell division. Thus the erythroblastic cells of the bone marrow fail to proliferate rapidly, resulting in the production of macrocytes, which are irregular, large, and oval instead of the usual biconcave disc.

These poorly formed cells, after entering the circulation, are capable of carrying oxygen normally but are fragile with a short life. Characteristics: Red cells are large in size (macrocytic), The hemoglobin content of each cell is normal (normochromic), Reduced red cell count, and decreased hematocrit.

Pernicious anemia is a macrocytic anemia that is combined with nervous system abnormalities. It results from vitamin B12 deficiency. Animal food is the main dietary source of vitamin B12. After ingestion, vitamin B12 normally combines with “the intrinsic factor” (a glycoprotein secreted by parietal cells of the stomach). It protects vitamin B12 from digestion by gastrointestinal enzymes and facilitates its absorption in the ileum.

Once the B12– intrinsic factor complex is absorbed, the intrinsic factor is released and the vitamin is transferred to the plasma. Vitamin B12 is stored in large quantities in the liver and is released slowly as needed by the bone marrow and other tissues. The normal liver can store enough vitamin B12 to meet the requirements for many months.

The main cause of pernicious anemia is, therefore, defective vitamin B12 absorption, secondary to intrinsic factor deficiency. This occurs in cases of gastric mucosal atrophy, with a deficiency of gastric secretions.

Megaloblastic red cells. Degenerative lesions of the spinal cord. These do not occur with isolated folic acid deficiency and may be linked to defects in other reactions that depend on vitamin B12 as a cofactor.

An increase in red blood cell count increases the oxygen-carrying capacity of the blood. The increased red blood cell volume is detected by an increased haematocrit value. In severe polycythemia, the hematocrit value may reach 70% instead of the normal 45%. This would greatly raise the blood viscosity, increase the arterial blood pressure, and the work done by the heart. It is also associated with sluggish peripheral circulation.

A 50-year-old man comes to his physician complaining of fatigue. He says that climbing the stairs leaves him short of breath and this has been getting progressively worse over the past month. The patient works in a stressful job and to relieve the stress he smokes and drinks 6 cups of coffee a day. He has been taking aspirin for the last 6 months for frequent knee pain.

The patient is diagnosed with iron-deficiency anemia caused by chronic blood loss from a stomach ulcer that was exacerbated by repeated aspirin intake. The bleeding is confirmed by the presence of occult blood in stools. The ulcer is treated medically and the patient prescribed iron tablets with vitamin C to aid iron absorption.