It is the formation of RBCs, The whole process for the production of mature RBCs takes about 7 days. Erythropoiesis involves the following stages:

Red blood cells (erythrocytes) transport hemoglobin, which is the main carrier of O2 in the circulation. In normal adults, the red cells occupy about 45% of the volume of the blood, this percentage volume of red cells in relation to whole blood is the hematocrit value. 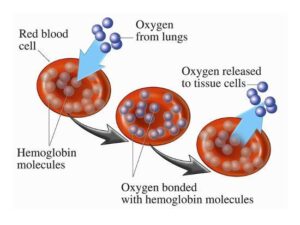 Combination of hemoglobin with oxygen

The most important feature of the hemoglobin is its ability to combine loosely and reversibly with O2. Hemoglobin binds O2 to form oxyhemoglobin, O2 is attached to the Fe2+ (ferrous iron) in the heme. The affinity of hemoglobin for O2 is affected by changes in pH, temperature, and concentration of certain substances in the red cells.

If blood is exposed to various drugs and other oxidizing agents, the Fe2+ in the hemoglobin molecule is converted to ferric iron (Fe3+) forming methemoglobin which is uncapable of carrying O2. Carbon monoxide reacts with hemoglobin to form carbon monoxyhemoglobin. Hemoglobin affinity for O2 is much lower than its affinity for CO, thus reducing the O2-Carrying capacity of the blood.

Any condition that causes the quantity of O2 transported to the tissues to decrease ordinarily increases the rate of red cell formation. The principal factor that stimulates red blood cell production is a circulating glycoprotein hormone called erythropoietin. Lack of O2 (hypoxia) stimulates the formation of erythropoietin. Most of the erythropoietin (90%) is formed in the kidney, the rest is formed mainly in the liver. Erythropoietin, in turn, enhances red blood cell production by the bone marrow until the hypoxia is relieved.

The cells of the bone marrow are among the most rapidly growing and reproducing cells of the body, thus they are greatly affected by the person’s nutritional status. Especially important for the formation and maturation of red blood cells are proteins, iron, vitamins, copper, and cobalt.

A healthy liver is essential for normal red blood cell formation. The liver manufactures globin, stores iron, copper, vitamin B12 and folic acid, and a small fraction of erythropoietin.

It is the factory in which red cells and most other blood cells are formed. Destruction of bone marrow by irradiation, chemicals, drugs, or bacterial toxins will lead to the deficiency of all blood cells which is called aplastic anemia.