The axilla is a four-sided pyramidal space between the root of the ram and chest wall. It allows the passage of the nerves and blood vessels from the neck to upper limb. It has a base, apex, and four walls. The base is directed downwards and is formed by the axillary fascia. The apex is directed upwards posterior to the clavicle.

Boundaries of the apex of the axilla

The walls of the axilla 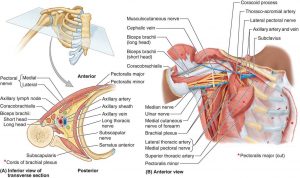 It beings as a continuation of the subclavian artery at the outer border of the 1st rib. It ends at the lower border of the teres major and continues as the brachial artery. The artery is divided into 3 parts by pectoralis minor muscle.

Branches of the axillary artery:

The central nodes are a group of nodes in the adipose tissue at the base of the axilla. The apical nodes are present at the apex of the axilla they receive lymphatics from all other groups and drain into the subclavian lymph trunk.

Origin: outer surfaces of the upper 8 ribs by means of 8 digitations.

Insertion: into the scapula.

Clinical notes: Winging of the scapula: Injury of the long thoracic nerve e.g. during mastectomy leads to the projection of the medial border of the scapula.

It is a network of nerves supplying the upper limb. It is formed of the ventral rami of the lower 4 cervical spinal nerves and the 1st thoracic nerve (C5, 6, 7, 8, and T1).

Stages of the plexus

3- Divisions: Each trunk divides into 2 divisions: anterior and posterior division.

Position of the stages of the plexus:

5- Branches of the plexus

A. Branches from the roots:

B. Branches from the trunk:

C. Branches from the cords: